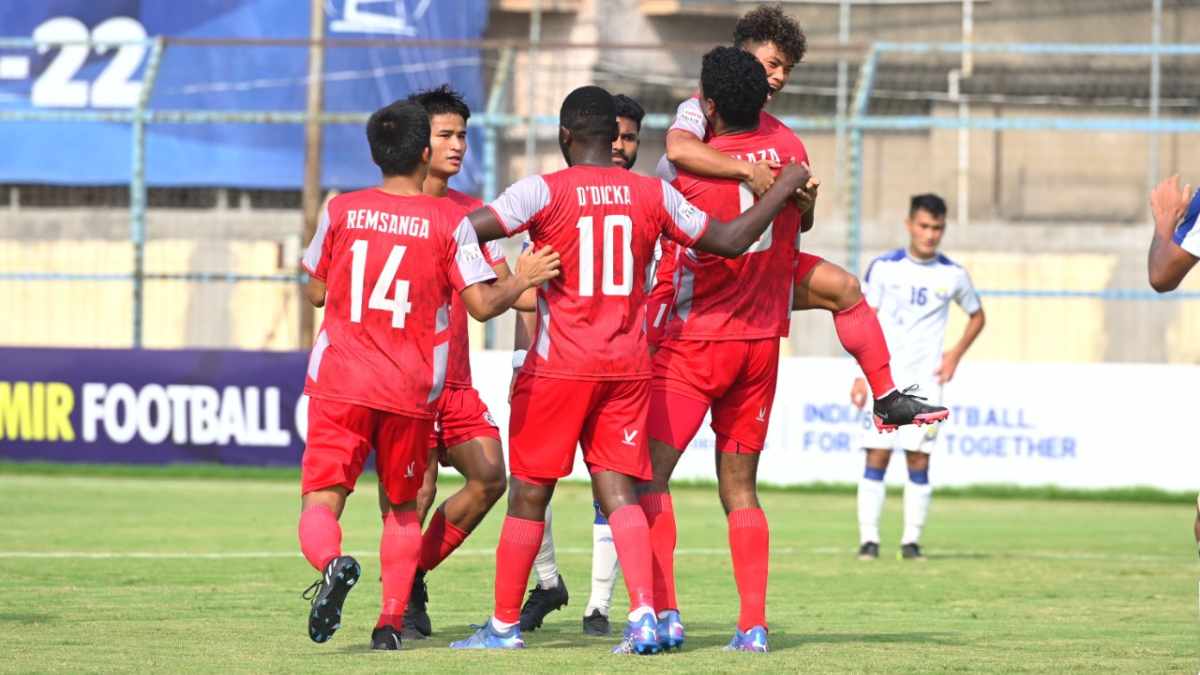 NAIHATI: Phase II of the Hero I-League was underway as Aizawl FC scraped past Real Kashmir FC, here at the Naihati Stadium. Willis Plaza gave Aizawl FC an early lead which was doubled before half time, courtesy of a Niraj Kumar own goal. Real Kashmir responded in the second half with two goals in three minutes from skipper Mason Robertson. The winning goal came in the 69th minute as Plaza bagged his second goal and Aizawl bagged all three points.

The game got off to a bright start for Aizawl after Willis Plaza scored in the second minute of the game. The Trinidian did well to get on the end of a cross from Vanlalnghenga, who had sprinted up the left flank for the attack. The ball was inch perfect and Plaza only had to cushion it off his side-foot into the back of the net.

Minutes later, Real Kashmir had an opportunity to restore parity when Mason Robertson was at the end of a cross from the right flank. The Real Kashmir skipper was completely unmarked but his shot lacked accuracy and power, and was comfortably collected by keeper Anuj Kumar.

Aizawl were on the attack again, this time down the right flank. A cross came in from Lalmalsawma and this time Dipanda Dicka managed to get his head on it but it was straight at the keeper. Robertson had another opportunity after brilliantly flicking the ball over Lalmalsawma but Anuj Kumar was at the end of a tame shot to collect it.

Ten minutes from the halfway point of the game, Samuel Kynshi brought Lalmalsawma down on the right wing. Skipper Samuel Lalmuanpuia played a deep, looping ball into the box that was headed back towards the face of goal by Ramhlunchhunga. Willis Plaza was the first to get his head onto it and the ball hit the underside of the crossbar, hit the feet of a confused Niraj Kumar and rolled into the net.

The constant pressure paid off as Aizawl dominated the first half and went into the break with a comfortable two-goal cushion. Real Kashmir tried to pull one back during the closing stages of the first half. Robertson, again, tried his luck from a free-kick, but Anuj Kumar was at full stretch to deny the him.

David Robertson was desperate to turn things around and decided to make three substitutions at half time. Malem Meitei, Bikramjit Singh and Rohmingthanga Bawlte came on to replace Ragav Gupta, Samuel Kynshi and Bernard Kouassi.

The momentum was still with Aizawl in the opening stages of the first half. However, two quick-fire goals from Real Kashmir changed the entire scenario of the game. Substitute Bikramjit Singh made his impact as he played a long ball towards the Aizawl box as Robertson beat a charging Anuj Kumar to reach the ball first and then slotted the ball into an empty net to open Real Kashmir’s account.

Two minutes later, Robertson struck again. This time Mason found himself facing the goal from a very acute angle. However, he put his boot through it and the ball flew over Anuj Kumar and into the roof of the net, restoring parity out of nowhere.

Aizawl did not take their foot off the gas and kept attacking the Real Kashmir box in an effort to retake the lead of the game. Ten minutes after the equaliser, the constant Aizawl attacking paid off as Lalremsanga put a beautiful cross into the box and an unmarked Willis Plaza headed it in to bag his second of the day and, more importantly, put his side ahead in the game again.

Frustration crept into the Real Kashmir side as they looked for an equaliser again. Towards the end of the game, a dangerous challenge from Rohmingthanga looked malicious but the substitute was lucky to dodge a yellow or even a red card for that tackle. At the end, Aizawl managed to cling on to their lead and left with all three points.

A win takes Aizawl FC to the top of the Relegation Playoff table, two points above Real Kashmir FC in second place. Real Kashmir are now just one point ahead of TRAU, who have a game in hand.