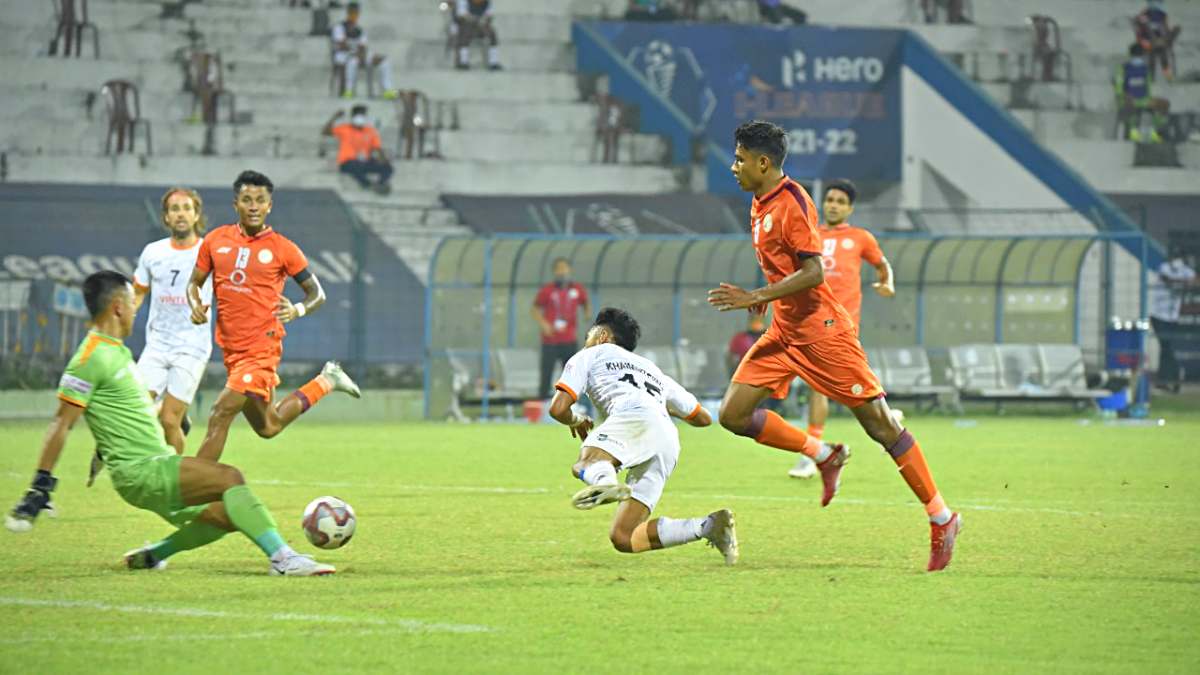 KALYANI: RoundGlass Punjab FC and NEROCA FC shared the spoils as their contest ended in a 1-1 draw at the Kalyani Stadium on Sunday. After Sergio Mendigutxia headed NEROCA FC in front in the 57th minute, Aphaoba Singh came off the bench to level the match in the 77th minute with a well taken goal.

NEROCA FC made the early running in the encounter, looking assured of themselves in possession and playing with a higher intensity than their opposition from Punjab. However, despite being in the ascendancy, NEROCA had little more than a few half chances to show for their efforts.

The first half remained a cagey affair for the most part, with both teams sizing each other up in the first 45 minutes. Neither team was able to strike a decisive blow in the first period, as the contest remained 0-0 at half time.

Both teams had bright sparks in terms of individual performances, with Juan Mera at the centre of NEROCA’s creative output, while Joseba Beitia pulled the strings for RoundGlass Punjab FC in midfield.

The game burst into life in the 57th minute, as Mendigutxia broke the deadlock for NEROCA FC. It was the Spanish maestro Juan Mera on set piece duty for NEROCA, as he delivered an in-swinging corner from the right. Mendigutxia timed his run to perfection and dashed into the front post, making ideal contact to send a glancing header into the unguarded far post. After almost an hour of play, NEROCA FC finally had the lead they threatened to take since the first whistle.

NEROCA FC were on the break again seven minutes later in the 64th minute. Khaiminthang Lhungdim got on the end of a slide rule pass that was played inside the backtracking Sumeet Passi. As Khaminthang bore down on goal, he was caught up by Sumeet Passi right as he was about to apply the finish. The NEROCA camp appealed for a penalty to be awarded for the challenge, but the referee viewed the incident differently.

NEROCA had another opportunity to increase the deficit in the 73rd minute. Sweden Fernandes played substitute Vicky Meitei through on goal, but after comfortable breaking away from the backline, Meitei made a mess of the finish in a one versus one situation.

NEROCA FC were left to rue their opportunities, when RoundGlass Punjab substitute Aphaoba Singh equalised in the 77th minute of the contest. After finding ample time and space inside the box, Aphaoba caressed his finish into the bottom corner, proving yet again that RoundGlass Punjab is a side with immense resilience in their ranks.

With just under a quarter of the game remaining, there were to be no further clear cut chances for either team. NEROCA FC may have shaded the contest on the balance of play, but there was to be no separating the two teams on the score sheet as RoundGlass Punjab FC held out for a hard fought point.