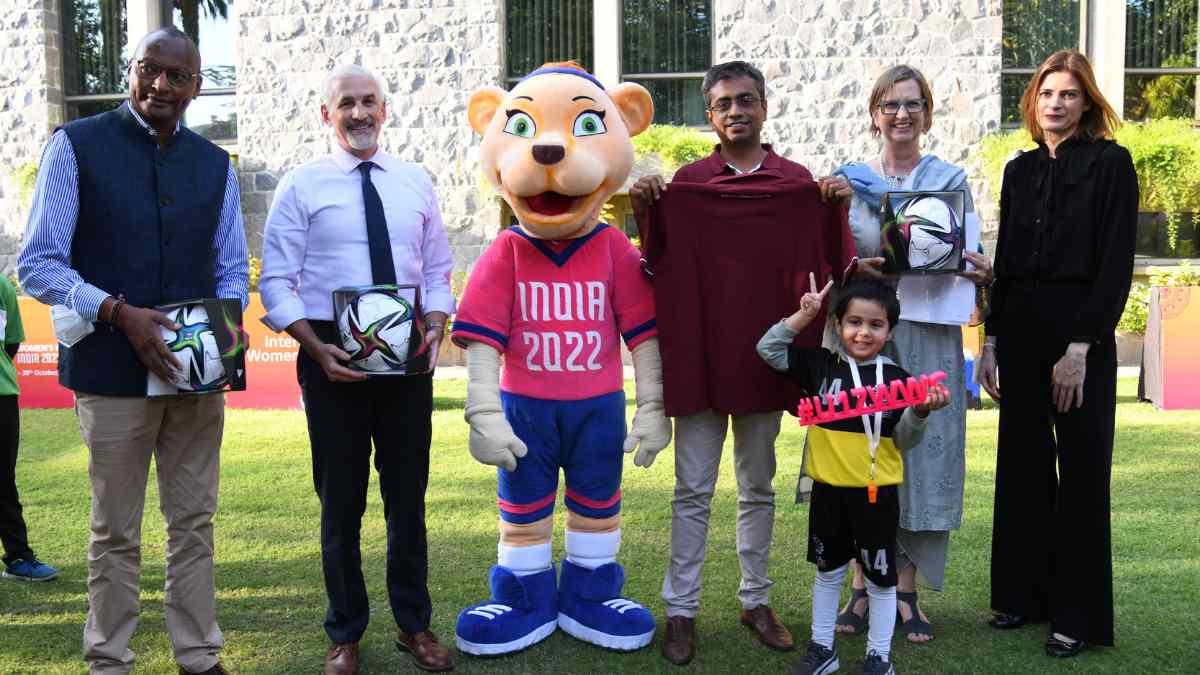 The aim of the event, held on 8th March 2022, was to strengthen the commitment to levelling the playing field for women and girls, leveraging football’s mass appeal to help bring positive change around the world.

The collaboration will aim to accelerate efforts to promote women’s leadership and equality in governance models, prevent and respond to gender-based violence, close the gap in investment in women’s sport and promote equal economic opportunities, promote women’s equal participation and bias-free representation in media, and provide equal opportunities for girls in sport, physical activity and physical education.

“Yet women still face barriers men do not – fewer chances to play organized sport as young girls, and there is a huge gap between what male and female athletes are paid, while women’s sports receive much less funding and media attention. Despite these challenges, I see examples of Indian women achieving excellence in sport – achieving excellence everywhere”, he added

Sarai Bareman, FIFA Chief Women’s Football Officer, said, “Marking International Women’s Day, this event has provided an important opportunity for young girls and female footballers in India to learn about and play football. As interest and excitement builds towards the FIFA U-17 Women’s World Cup in India later this year, FIFA and the Local Organising Committee look forward to working closely with organisations in India like UN Women, as well as exploring how to encourage more women and girls in India to play football and use the tournament as a platform to continue important conversations and inspire positive change.”

The event covered a 3 versus 3 match between the female players of ages 8-11, from UNHCR, FIFA and CEQUIN- an NGO that uses sports for development, and the felicitation of female coaches who had been trained by the tournament’s Coach Education Scholarship Programme. The UN Resident coordination pinned badges of honour- an emblem of the Indian flag crossing over the United Nation’s flag to strengthen the UN’s commitment to promoting women and girls in sports in India.

“The LOC, since its formation, has made a concerted, consistent and dedicated effort to create a platform for women – irrespective of societal, sociological, financial status – to succeed, be empowered and take leadership roles. Through initiatives related to football development, the LOC is already empowering women in leadership, employability and self-sustenance.

“This event, in collaboration with UN Women and the United Nations in India, has helped cultivate further lessons in empowerment, economic justice and taking a step towards achieving equal footing in society,” said Nandini Arora, Project Director of the LOC.

Dalima Chhibber, a football player from the Indian Women’s Football Team, said, “This event is a perfect representation of the impact football can have on youngsters from different walks of life. An important step towards an equal future is to empower girls to take up leadership roles so that when they become confident women tomorrow, whichever profession they take up.

“It was also very encouraging to see participants from the Coach Education Scholarship Programme given the opportunity to impart their skills to the young girls with so much enthusiasm. The future of women’s football looks bright with more representation at the grassroots and moving forward, football can play a crucial role in advocating for an equal society.”

Addressing the importance of sports as a tool for gender equality, UN Women Country Representative Susan Ferguson said, “We are proud to collaborate with FIFA U-17 Women’s World Cup India 2022 to bring young girls to football. Sports are an important vehicle for Generation Equality. Together we can level the playing field using football to create an ecosystem that will promote women and girls’ participation in leadership roles. We definitely know these young athletes are #KisiSeKumNahin.”

Both, the LOC of the FIFA U-17 Women’s World Cup India 2022 and UN Women in India will work closely to organise more such events with public authorities, international organisations, the private sector, and media and sports organisations to make football more accessible to women and girls and to disseminate diverse sports content to promote gender equality.