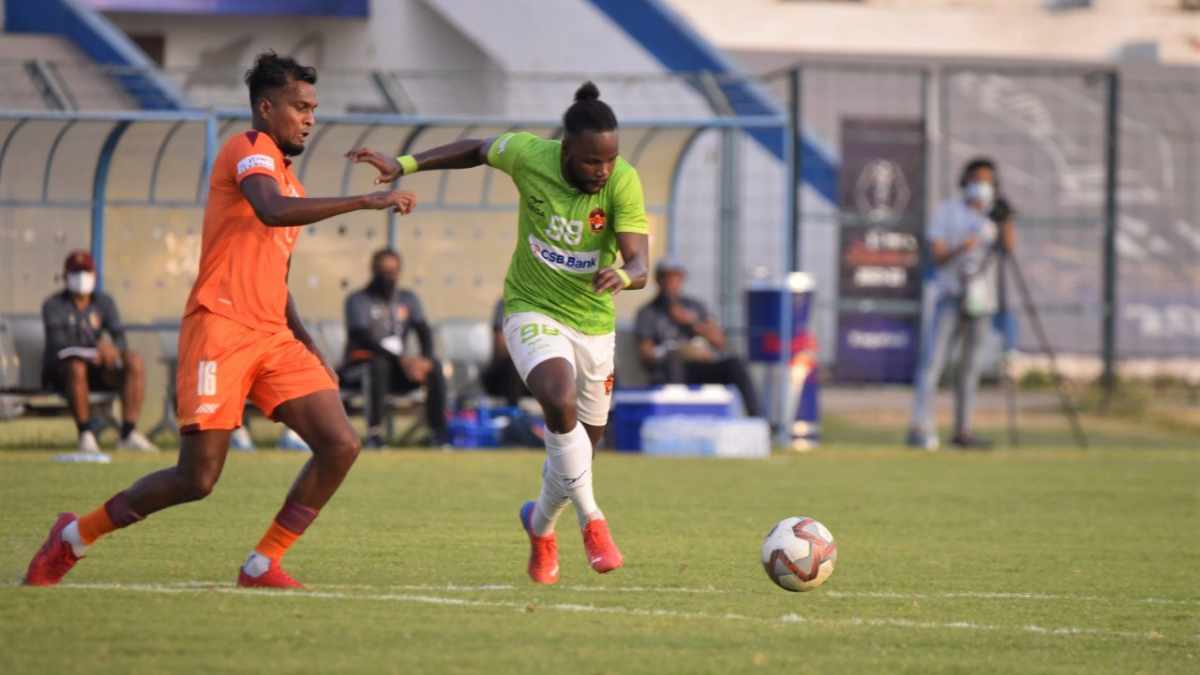 Kalyani: Gokulam Kerala FC equalled the longest unbeaten streak of 17 games in the Hero I-League to end Phase-1 on top of the table by easing past RoundGlass Punjab FC 3-1, here at the Kalyani Stadium.

In equalling Churchill Brothers’ record set 12 years ago, Gokulam Kerala FC had Aminou Bouba’s pinpoint header, Luca Majcen’s clean finish and an own goal by Joseph Yarney help them swell their points to 30. RoundGlass Punjab had their consolation come off an own goal scored by Aminou to remain in third position with 23 points after their third loss.

Both teams approached this game on an aggressive note. RoundGlass Punjab did the early running from the left. Travis Major, pushing himself deep, had a timely and bold tackle by Gokulam Kerala defender Mohammed Jasim to clear the ball for a corner-kick.

It did not take much time for Gokulum Kerala to make their presence felt with an attempt on goal. Jithin MS found himself on the top of the box and with a clear look on goal only to have his attempt go over.

RoundGlass Punjab at the other end had Major try from the left to test goalkeeper Rakshit Dagar with a maximum stretch to keep the ball out at the second post.

Ten minutes into the game and the best chance fell to Gokulam Kerala as Muhammad Uvais, from the left, switched the width of the ground to find Emil Benny inside the box and in the clear and the later controlled the ball and had a go only to have the try get cleared off the goal line.

Luck once again deserted Gokulam as they were denied by yet another goal line save. This time Jourdain Ronaldo Fletcher’s effort was cleared off the line for a corner kick.

The resultant corner kick gave the breakthrough for the Kerala side. Defender Aminou Bouba rose high over a couple of defenders to connect his header past Jaspreet Singh resulting in Gokulam Kerala FC taking the lead.

Gokulam Kerala pushed forward with counter-attacks which unsettled the opponents. Luka Majcen on one occasion weaved through the defence and proved to be a handfull for RoundGlass Punjab, which ended up in Freddy Lallawmawma tackle him in a desperate attempt and earn the first yellow card of the match.

Punjab, who occupied the midfield for most of the session thereafter had a few half attempts come by. Kurtis Guthrie, meanwhile, had his cross from the left dangerously floated into the Gokulam box, however goalscorer Aminou Bouba used his height to brilliantly head away.

Punjab opened the second half with two back-to-back attempts by Guthrie. First, Major pushed deep into the box and chipped for Guthrie who ended up missing from close range. Almost immediately, Guthrie was left furious when his effort was cleared by the defenders once again resulting in a corner kick.

RoundGlass Punjab profited from the corner kick and levelled scores, earning an own goal as Bouba Aminou, missing sight and direction, ended up heading into his own goal off a Kean Lewis corner kick to make it 1-1.

Against the run of play, Gokulam Kerala from a counter-attack took the lead. Fletcher, gaining the ball from Freddy, powered on with an opportunity he did not want to let go. Keeping possession all through in the one-to-one run, he gently switched to Majcen who drove past Jaspreet Singh for his 13th goal of the season to make it 2-1 for Gokulam Kerala.

Gokulam Kerala doubled the advantage through an own goal to make it 3-1. A free kick earned on the right, had Bouba, at the second post rise and connect. The attempt was good enough to create confusion in a melee that ensued. What resulted thereafter was defender Joseph Yarney slicing the ball home leaving goalkeeper Jaspreet no chance.