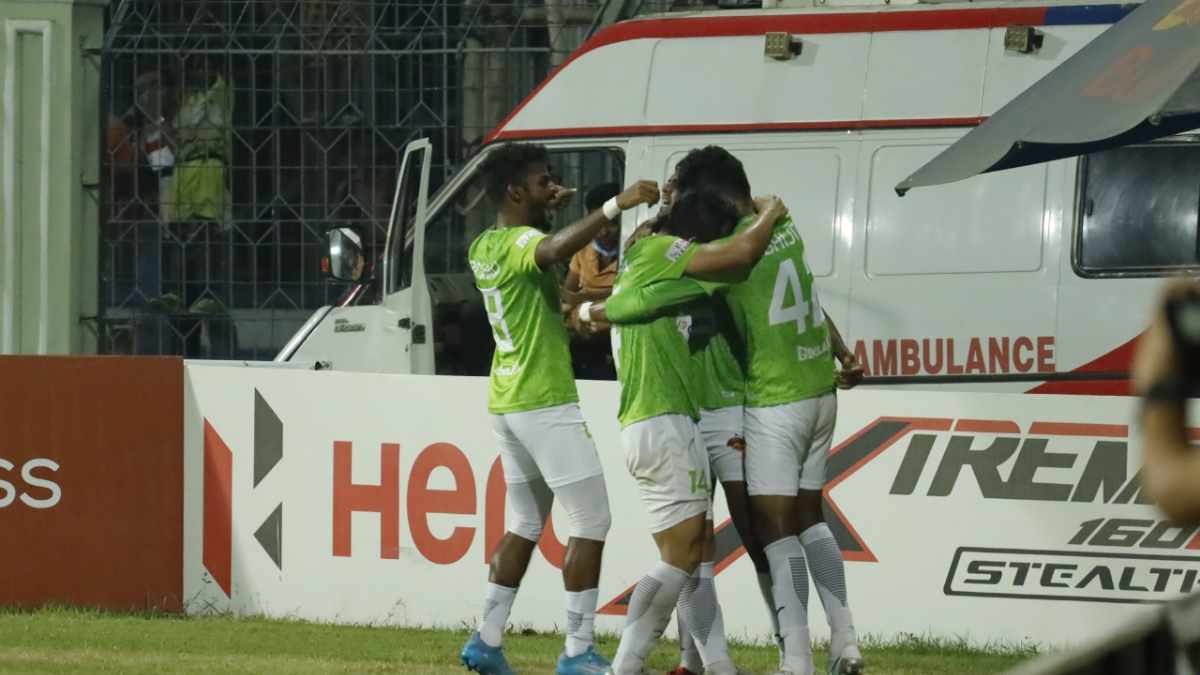 KOLKATA: Defending champions Gokulam Kerala FC set a record by extending their unbeaten streak to 18 games after completing a facile 2-0 win over luckless RoundGlass Punjab FC in the Hero I-League 21/22 at the Kalyani Stadium.

Having equalled Churchill Brothers record set 12 years ago just four days ago, Gokulam Kerala FC had Jourdain Fletcher’s finish a well weaved counterattack in style and later had substitute Sreekuttan VS get his name on the scorers list with a dramatic finish deep into the second half.

Victory for Gokulam Kerala was the tenth in league and the first in Phase 2 and swelled their tally to 33 points which meant being perched at the top of the standings.

RoundGlass Punjab FC began proceedings, but the early push was by Gokulam Kerala FC which livened up the contest. Emil Benny finding himself space inside the box on the left tried on goal only to have custodian Jaspreet Singh dive and punch the effort out.

Pushing hard, RoundGlass Punjab created a slur of moves that pushed Gokulam Kerala to the wall. Maheson Singh Tongbram was the centre of action during this period. He first took on Sharif M Mohammad on the edge of the box on the right, cut past and let fly only to have goalkeeper Rakshit Dagar parry the ball over.

Minutes later, Maheson used his footwork to beat two defenders, but his top-of-the-box left-footed grounder missed the target wide at the far post.

RoundGlass Punjab were left ruing when Kean Lewis soft-touched a volley from close after the Gokulam defence was found wanting and the resultant loose ball had unmarked Maheson surprisingly go over.

Gokulam Kerala FC, who was at the receiving end after RoundGlass Punjab put pressure then did the unthinkable leading to the opening goal.

Following a corner-kick, Jithin M.S launched a quick counterattack from the right flank. Picking up a quick and intelligently ball rolled out by goalkeeper Rakshit Dagar, who latched on to Kean Lewis’ corner-kick, Jitin used the space ahead with a solo run.

He then released a pass brilliantly into the path of Jourdain Fletcher, who with a pacy dash beat Shankar Sampingiraj first and then angularly finished from inside the box past goalkeeper Jaspreet Singh.

The goal spurred another penetrative run by Gokulam Kerala FC which almost had Tahir Zaman score. The move was orchestrated by a brilliant defence splitting pass by captain Sharif M Mohammad who moved up on the left in his own half by combining with Fletcher.

Zaman picking up the through pass got past a defender, which also forced the goalkeeper Jaspreet leave his charge. However, the attempt that followed was too tight to finish at the near post.

Closing into the halfway stage, RoundGlass Punjab had Travis Major’s cross from the right go abegging after Freddy Lallawmawma managed a feeble header that looped gently.

Leading by a goal, Gokulam Kerala almost had Fletcher score on the switchover. However, he was done in by a brilliant block by defender Josef Yarney, who stretched long, nullifying the shot.

RoundGlass Punjab had their close moment and almost pulled one back. However, luck and accuracy denied Travis Major. Leaping way over defender Mohammed Jasim, Fletcher headed across from the right only to see the ball bounced past the width of the goal and a host of players.

Three minutes later, Major once again had his header off target after a Lewis cross, who did well to cross on the turn on the right flank, lack the punch to create an impact.

RoundGlass Punjab then had Aakash Sangwan’s pass from the left wing create panic in the rival defence only to have his final delivery not gain the desired direction and instead earned just a corner-kick.

The Punjab side had chances aplenty but fell short. Kurtis Guthrie went over with his header from close range, then Gokulam Kerala custodian Dagar affected a goalline save with an alert block that kept Guthrie’s header to the top of the goal in check.

Then, Joseba Beitia brilliantly set up Freddy on the left but the effort that followed crashed onto the bar to add to the Punjab team’s woes.

Against the run of play, Gokulam Kerala added their second. Fletcher from the left played to substitute Rishab, who spotted substitute Sreekuttan VS in the clear on his right. A first-touch release by Rishab gave Sreekuttan possession, who brilliantly weaved past Maheson inside the box to let loose a left footer.

The attempt was initially blocked by Jaspreet, but fumbled as well which allowed the ball to gently bounce past the line despite his last ditch dive.

Thereafter it was all about holding on, which Gokulam Kerala did and complete a double over the Punjab side having beaten them 3-1 in Phase 1.