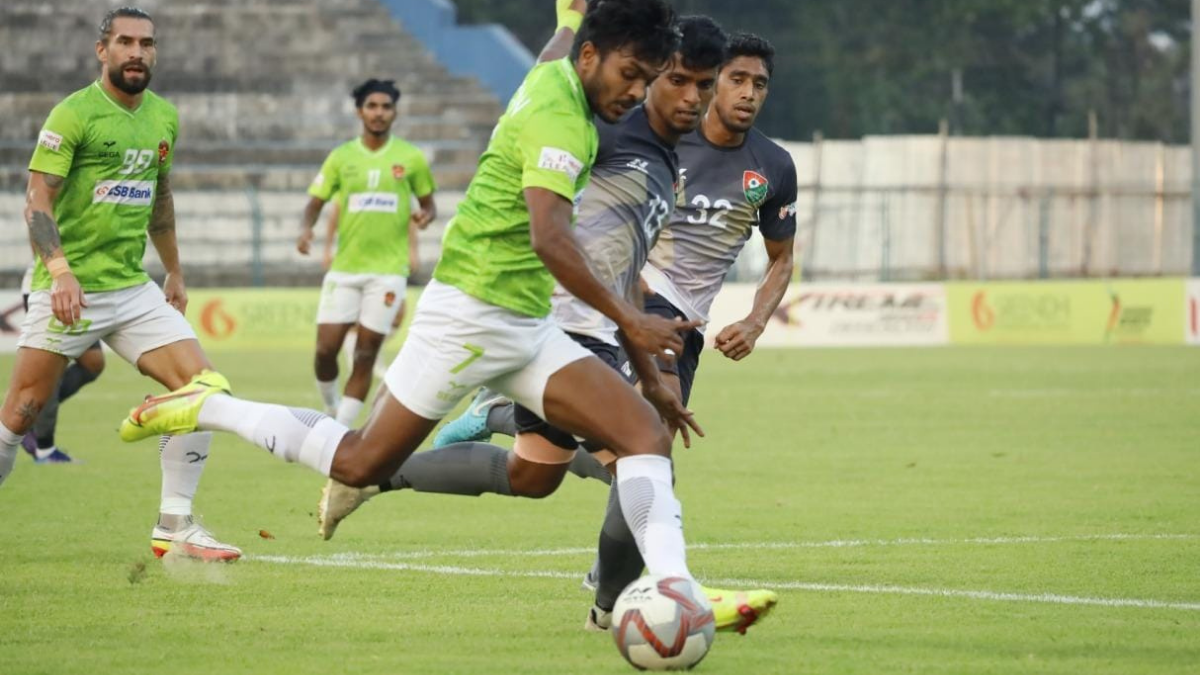 KALYANI: Gokulam Kerala climbed to the top of the Hero I-League 2021/22 table with a win over Sreenidi Deccan on Tuesday at the Kalyani Stadium. The defending champions rode on two goals from Bouba Aminou (4′) and Jourdaine Fletcher (31′) in the first half to take control of the match.

An early second half goal from David Castaneda (48′) turned the contest into an edge-of-the-seat thriller, but Gokulam Kerala managed to hold on to their lead till the final whistle. The match started with Gokulam Kerala in attack straightaway as Luka Majcen took a shot from inside the box before it was deflected away by the goalkeeper.

The defending champions made most of the early corner as Sharif Mohammad’s cross inside the box was headed into the back of the net by Bouba Aminou to give Gokulam Kerala a 1-0 lead.With Sharif Muhammad and Luka Majcen driving the attack, Gokulam Kerala maintained dominance inside Sreenidi Deccan’s half.

In the 11th minute, Jourdaine Fletcher took a header at the target after receiving a cross from his right but it went straight into the goalkeeper’s hands. Ten minutes later, Sreenidi’s Arijit Bagui took a free kick from a dangerous position but it was well saved by goalkeeper Rakshit Dagar to deny the opposition.

As the game progressed, Sreenidi Deccan started getting on the ball and creating opportunities. In the 29th minute, Sreenidi almost scored the equaliser before a timely intervention from Gokulam Kerala’s defender at the goalpost. A counter-attacking move led to Gokulam Kerala doubling their lead in the 31st minute as Fletcher received a quick pass from Majcen, and the Jamaican forward struck his left foot on the ball to hit it past the goalkeeper.

Minutes later, Castaneda received the opportunity to get a goal back for his team, but his header went wide off the mark. The Malabarians had to make a forced change as goalscorer Fletcher got injured and was replaced by Sreekuttan late in the first half. Sreenidi Deccan continued to search for a goal as the clock ticked down, but were unable to score by the halftime.

A spirited Sreenidi Deccan got a goal back at the start of the second half with Castaneda hitting a fantastic shot from outside the six-yard box into the back of the net. Gokulam Kerala made a quick change soon after conceding the goal, bringing on Zodingliana in place of Jithin MS. Six minutes later, they made two more changes, bringing on Rishad and Alex Saji in place of Thahir Zaman and Emil Benny.

Gokulam Kerala started playing deep inside their own half, moving cautiously, while Sreenidi Deccan started enjoying most of the possession in the match. In the 71st minute, Ogana received the ball on the left, and broke through on the left flank before being stopped by Muhammad Uvais.

As the match headed to the final 10 minutes, the intensity of the game reached its peak with Sreenidi Deccan putting the pressure on the opposition. In the 82nd minute, a defensive error from Sreenidi allowed Sreekuttan to break through with a clear pathway to the goal. But he made the wrong choice to make a cross inside the box, and it was saved by the goalkeeper Shibinraj Kunniyil.

A set-piece at the stroke of full time taken by Lal Chungnunga was defended well by Bouba Aminou, and the ensuing corner did not yield any results for Sreenidi either. Gokulam Kerala managed to hold down the fort before the final whistle and picked up their sixth win of the season.