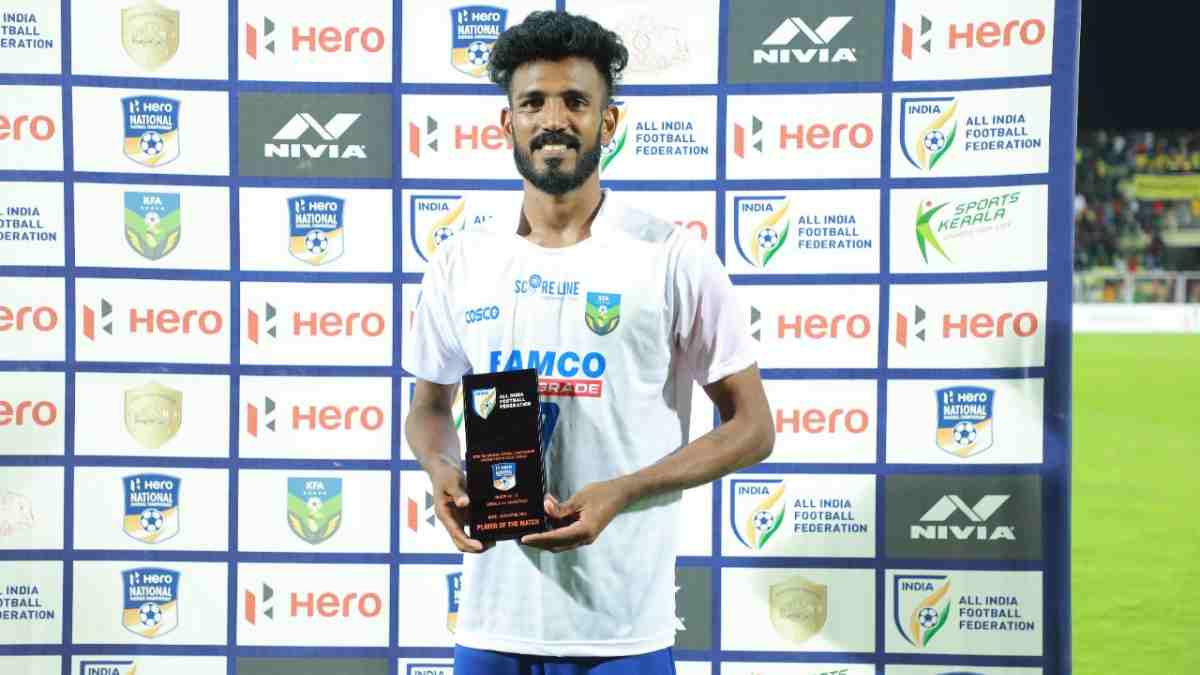 Malappuram: Powered by captain Jijo Joseph’s majestic hat-trick, Kerala stamped their credentials among the contenders for the 75th Hero Santosh Trophy, beating Rajasthan 5-0 in Group A.

Roared on by a capacity crowd at the Manjeri Payyanad stadium, the hosts started proceedings at a frenetic pace, attacking with verve right from the start and not allowing Rajasthan to settle into the game. Kerala scored inside the first 10 minutes via a majestic strike. In the sixth minute, Kerala won a free-kick just outside the box. Captain Jijo Joseph took charge of proceedings, lining the ball up, before curling it into the top right, just beyond the reach of Maninder Singh in Rajasthan’s goal.

The goal gave Kerala more confidence and coach Bino George urged his team to move forward and try and score more, to put the game beyond any doubt. Three minutes after taking the lead, they came close again, Muhammed Saheef’s cross headed over by M Viknesh.

Kerala attacked collectively and consecutively, responding not just to the crowd but also to the depth of talent in their squad, and with better finishing could have put the game to bed within the first half hour. Viknesh, Arjun Jayaraj and Muhammed Safnad all had shots at goal, and in most cases, Maninder was drawn into a save, forced to keep his team in the game. Kerala’s captain Jijo Joseph was majestic in midfield, pulling the strings and creating opportunities every time he had the ball in space, but somehow Rajasthan kept them at bay.

In the 30th minute, Rajasthan may as well have had an equaliser too. Some lacklustre defending by Kerala resulted in the ball falling to Youraj Singh but he he blazed wide with just the goalkeeper to beat.

The miss was a wake up call for Kerala, a clear signal that one goal wouldn’t do. Soon they had more. In the 38th minute, Nijo Gilbert drove the ball into space on the left of the box, before unleashing a superb shot into the far corner to double the hosts’ lead going into the break.

Kerala kept the momentum up in the second half, holding majority of the possession and continuously peppering the Rajasthan goal with shots. Jijo Joseph was constantly a menace, and three minutes either side of the hour-mark completed his hat trick. His second goal came in the 57th minute, Muhammed Saheef’s brilliant through ball putting him through one-on-one with the goalkeeper and Joseph did not miss.

In the 62nd minute, after some brilliant play on the flank, Soyal Joshy crossed the ball in from the right and Joseph glanced it in to put his team four up and enjoy the applause of the crowd. Ajay Alex’s 81st minute goal was the icing on the cake as Kerala took all three points and their captain, the match ball.