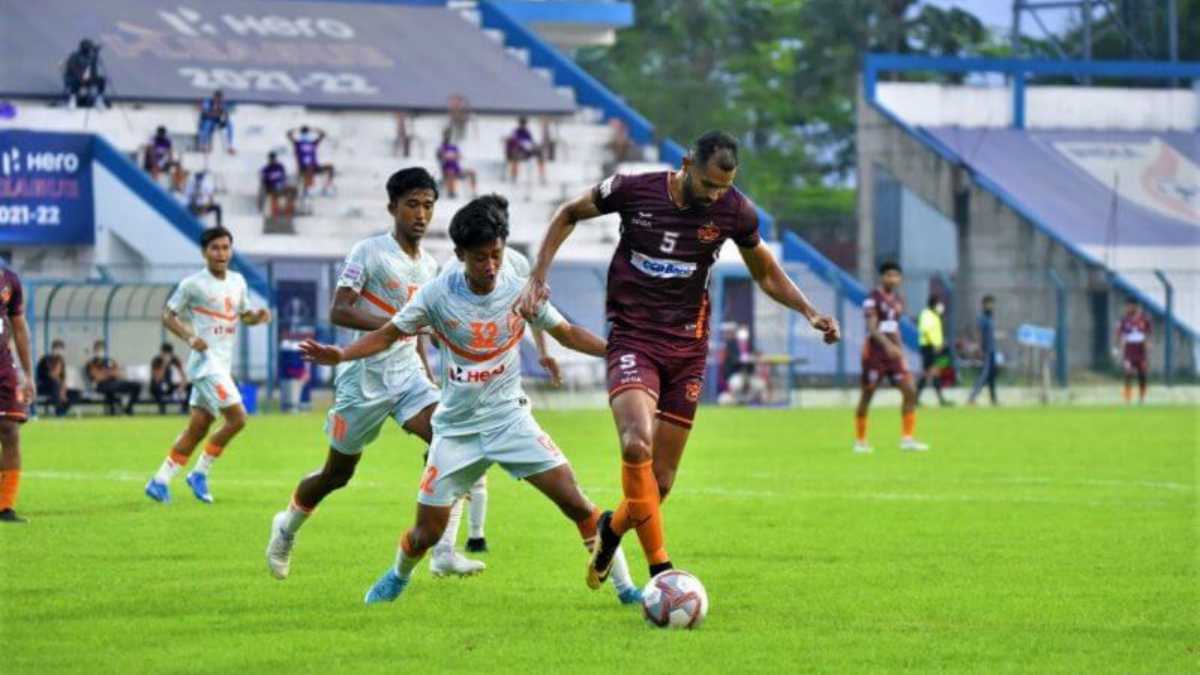 KALYANI: The reigning champions Gokulam Kerala on Saturday handed Indian Arrows their heaviest loss of the season and in the process reclaimed top position in the Hero I-League table, here, at the Kalyani Stadium. Ahmed Waseem Razeek, Sharif M Mohammad, Luka Majcen, Jithin M.S. and Thahir Zaman were on target for Gokulam as they humbled Indian Arrows 5-0.

With their high-pressing, the Indian Arrows got off to a fast start. They also did well in the early stages of the game by denying their opponents any time on the ball. In the sixth minute, Sharif Mohammad attempted to generate an opportunity for his team by blasting a free-kick toward Aminou Bouba, but the Cameroonian was unable to keep the ball in play.

Lalchhanhima Sailo created an early opportunity for Shanmugam Venkatesh’s side by setting up Satendra Yadav with a sneaky pass but the latter’s effort sailed wide.

Waseem Razeek netted his first goal for Malabarians just nine minutes after making his debut as Gokulam Kerala went one up. Luka Majcen set up the ball for the Sri Lankan after seeing him inside the area and Razeek did not make any errors as he smashed the ball across the goal line.

Arrows boosted their effort in the midfield after conceding the first goal as Sibajit Singh tried his luck from beyond the box in the 13th minute, but his shot flew over the bar.

Although they were up, Gokulam Kerala continued to generate chances in search of their second goal. Razeek attempted to set up Emil Benny with a ball in the 20th minute, but the latter was unable to connect with the ball, and it went for a goal kick.

Emil Benny made another run four minutes later, skipping by the Indian Arrows defence before attempting a low shot that went wide. After a foul challenge by Sailo, Majcen got a penalty in the 26th minute. Syed Zahid managed to save Gokulam Kerala skipper Sharif Mohammad’s spot-kick with an outstretched foot but the Afghan doubled the advantage after putting in the rebound of his penalty.

Four minutes later, Majcen made it 3-0. The Slovenian was set up by Razeek with a brilliant through ball for his ninth goal this season.

Mohammed Jasim set up Majcen with a wonderful ball from his corner a few minutes later, but the attacker missed a chance.

After going 3-0 up, Gokulam coach Vincenzo Alberto Annese chose to put his bench strength to the test by bringing on Rishad and Zodingliana for Muhammed Uvais and Sharif M Mohammad in the 37th minute.

The second half began with Gokulam winger Jithin MS trying his luck in the 53rd minute as he ran with the ball from the halfway line to the Arrows box but failed in beating rival goalkeeper Syed Zahid who made an easy save.

Indian Arrows players created a perfect play as the hour marked near with their intricate passing. They ran with the ball from the backline and managed to reach Parthib Gogoi in the attacking third but he misplaced the final ball.

Indian Arrows controlled the play better in the second half but despite the ball possessions they were not able to take many shots and had no shots on target till the 61st minute. Defender Raj Basfore attempted a header in the 63rd minute after receiving a lofted free-kick inside the area from Parthib Gogoi but he was off the target.

Gogoi had a chance to reduce the lead in the 66th minute but his grounded effort went wide as Indian Arrows continued to look for their consolation goal.

Jithin smashed the fourth goal for Gokulam in the 72nd minute after being set by Majcen. Six minutes later, he ran past Indian Arrows’ defence on the left wing before swinging a high cross, which went above everyone.

Lalchhanhima Sailo almost pulled one back for his side in the 79th minute as he tried to curl in a dipping shot into the top corner from outside the box but it went over the bar.

Thahir Zaman scored the fifth goal of the match to all but seal Indian Arrows’ fate. Substitute Sreekuttan set him up with the ball with a low cross from the left flank and he did well to tap the ball into the net from point-blank range.