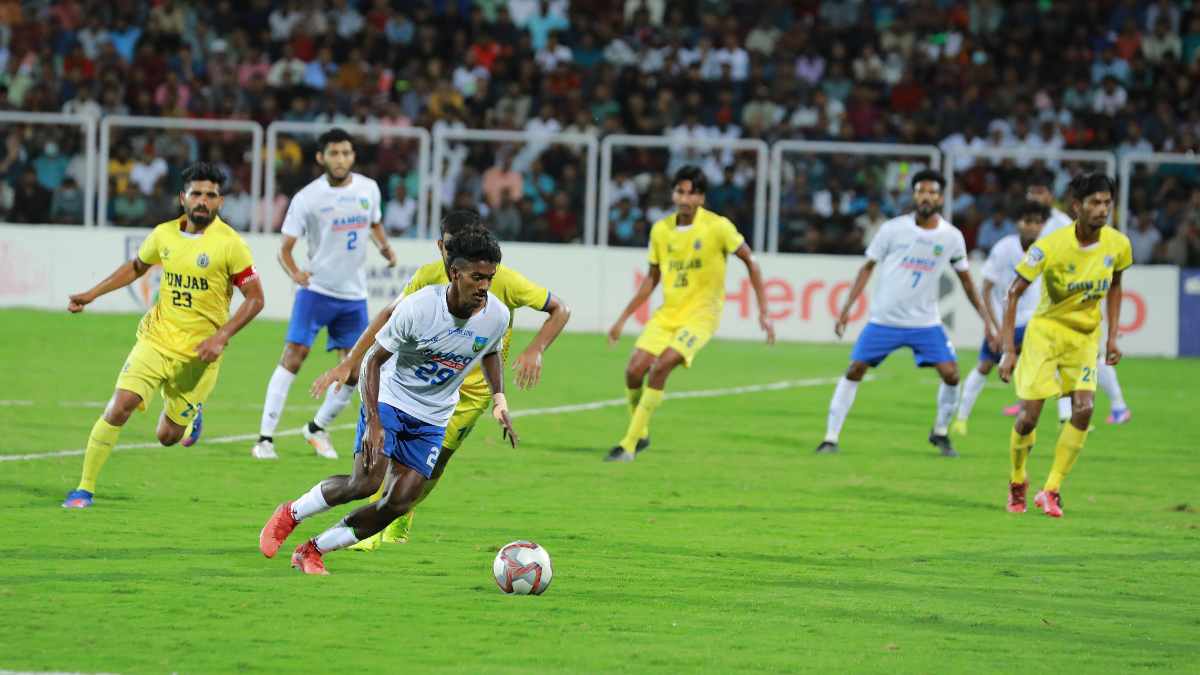 MALAPPURAM: A late goal from talismanic Kerala captain Jijo Joseph proved the difference as Kerala edged out Punjab 2-1 in a thriller at the Hero 75th National Football Championship for Santosh Trophy at the Manjeri Payyanad Stadium in Malappuram here on Friday. Jijo discord the equaliser in the first half, before firing home the winner to take his team through to the knockouts.

The game was built on the old stereotypes of Kerala’s skill going up against Punjab’s physicality, and the crowd, thronging in numbers, added up some extra spice. If the packed stadium was supposed to add pressure, Punjab hadn’t been told. In the eleventh minute the press almost brought them the opener. Indervir Singh robbed Arjun Jayaraj off the ball 25 yards from the Kerala goal, and shot quick and hard. The ball drifted wide.

A minute later, Kerala were punished for making the same mistake. Off an innocuous Punjab throw in, the ball was played long into Kerala’s box. G Sanju missed a routine clearance to hand the ball over to a charging Manvir Singh.

Manvir drove into the box, opened his body up and curled a shot towards the bottom corner. Despite V Midhun’s acrobatic diving save, the ball looped into the net, shocking the stadium into silence. Punjab had the lead.

Shighil became the architect, first teeing the ball up for Salman Kalliyath to shoot at goal from inside the box. Kalliyath went for the near post, and despite being wrongfooted, Harpreet Singh pulled off a super save to put the ball out of play.

The move would spark a set of corners for Kerala, each of which the home team decided to experiment with, playing short, flat to the top of the box and deep to the far post.

Off the fourth, Shighil and Arjun Jayaraj played a delicate one-two before the latter whipped a perfect cross right on the penalty spot. Jijo Joseph rose first, and rose highest, nodding the ball home. Kerala were level.

The game soon turned into an end to end affair. In the 22nd minute, coach Hardeep Singh brought on their goalscoring threat Jashandeep Singh from the bench and almost immediately, Punjab had hit the net again.

Captain Parmjit Singh’s curled freekick was met by a diving Manvir, who headed it perfectly into the far bottom corner. Before the celebrations could commence, the referee had blown for offside.

Kerala had chances of their own. Muhammad Rashid’s low cross was parried by Harpreet Singh towards Jijo Joseph right near the penalty spot. The ball unfortunately was slightly behind the midfielder, who nonetheless tried an acrobatic attempt at goal. It drifted inches wide.

Just around the half hour mark, Midhun went down injured and Kerala were forced into subbing their second goalkeeper S Hajmal on. Midhun had been integral to Kerala’s success at the back but despite his loss, Kerala did not lose momentum.

In first half injury time, came another ‘almost’ moment, An Arjun Jayaraj freekick from 40 yards from the left flank, somehow found its way through a throng of defenders to hit the upright. The ball had been played long, and deep, and snuck through a sea of bodies. The two teams went into halftime level.

Kerala came out in the second half keen to take complete control of proceedings, dominant on the ball and their midfielders not worried by the high press.

Punjab had sought to cut them from the centre — where they were strongest — and Bino George responded by asking them to target the wings with abandon. To ease this, PN Noufal was brought on and the midfielder was a constant threat, his crosses constantly landing in dangerous areas, forcing Punjab to clear hurriedly.

One after another the crosses rained, from both sides of the pitch and one after the other, Baljit Singh and Rajat Kumar were forced to clear. The crowd were getting impatient, asking more from their elegant side, and produced their biggest cheer when Bino George withdrew Viknesh to bring on TK Jesin.

Even here, he harried Punjab deeper and deeper into their box, constantly driving with the ball and dropping markers by the wayside. His best moment though, and the moment that sealed the game, came when he let the ball be.

In the 86th minute, with the scores level and the Manjeri Payyanad screaming for a goal, Sanju G dropped a curling cross into the box, from distance. Charging to the ball, Jesin took one defender with him, before feinting and letting the ball pass by.

Thrown off centre, Punjab were suddenly exposed, Jijo, alone, near the penalty spot, taking the cross down with his chest, before firing hard and true, into the net. It was another late Kerala masterclass, and another goal from their talisman. They had secured another win, and three more points, the only blemish, a late injury to Arjun Jayaraj. The semis await.