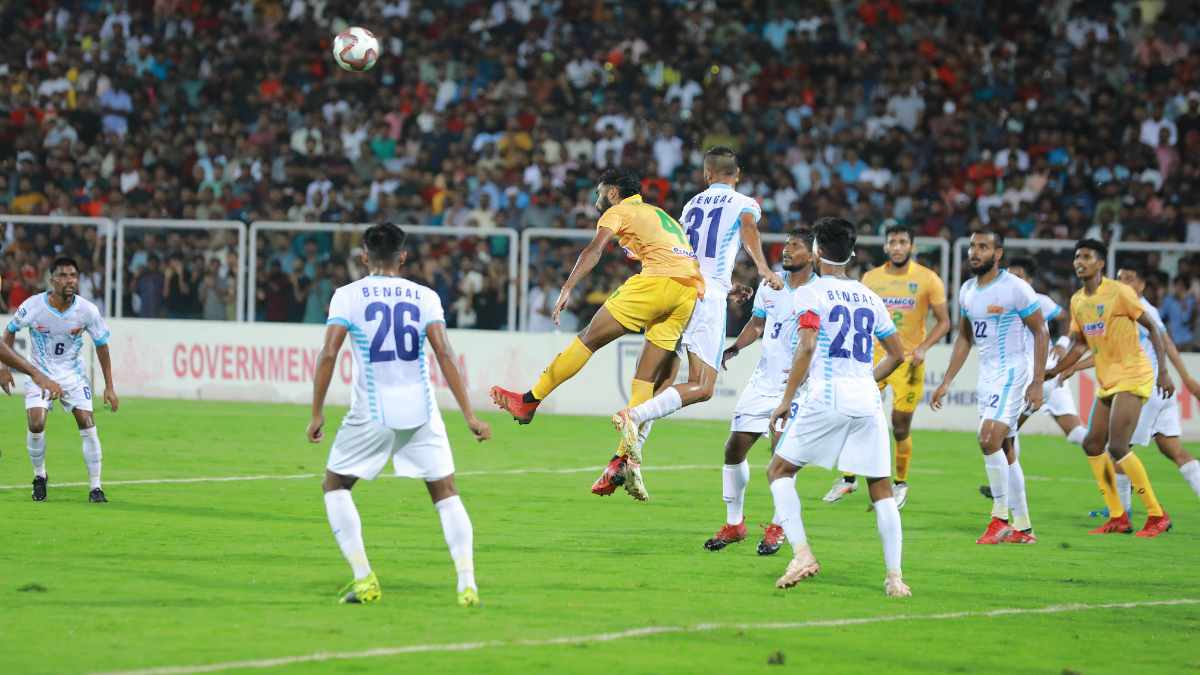 Unawed by the packed crowd that had descended on the Payyanad Stadium for the game, it was West Bengal who started off on the front foot, their quickness on the ball putting Kerala’s defence in constant trouble. In the third minute they almost had their reward, when Basu Deb Mandi was played through into the box via a smart ball from midfield. The midfielder collected the pass and shot at goal, forcing V Midhun into a smart low save to his right. To the great relief of the crowd though, the flag had already been raised for offside.

The early attacks were a fair warning for Kerala, who slowly warmed to their task, controlling more of the ball, and in what is becoming their trademark, switching flanks with ease, while constantly shifting shape. Despite all their flair though West Bengal held firm denying their attackers any space in the final third to thread through a pass. In the 25th minute, Kerala had their first shot on target, M Viknesh collecting the ball 30 yards from goal and letting fly, albeit into the safe hands of Priyant Kumar Singh.

Priyant was called into action again soon enough. In the 26th minute, Arjun Jayaraj and Nijo GIlbert played a brilliant one-two that allowed the latter to run into the box and try and cut the ball back to the swarm of Kerala attackers streaming in. Priyant was quick to cut the cross off though.

Twelve minutes later, Kerala won a freekick near the left touchline and Jayaraj curled a teasing ball in. The slightest of touches by Viknesh would have resulted in the opener, but despite the number of bodies in the way Priyant palmed it out of danger.

Kerala were knocking on the door repeatedly and held almost two thirds of the possession, but went into halftime with nothing to show for it, both teams locked in a goalless stalemate.

Right off the whistle in the second half, Kerala came out looking hungrier, the crowd’s noise bolstering them. It was the dual pressure that created the best chance of the game.  West Bengal erred in defence, Subhendu Mandi losing the ball to Shighil inside his own box.

The loose ball fell to Viknesh in the middle of the box, 12 yards from goal. Before he could shoot though, Priyant SIngh had closed him down, deflecting the attempt out for a corner. Bengal had escaped.

Wave after wave of Kerala attacks were met by a white wall of West Bengal resistance. Priyant Singh and the captain Monotosh Chakladar cleaning up for their colleagues’ mistakes with last ditch clearances and diving saves. In the 53rd, Priyant made his first error of the game, spilling from a corner to allow Ajay Alex a shot at goal from five yards out. The defender shot wide.

With the minutes ticking by, the crowd got more desperate, and on the touchline so did Bino George. Kerala were controlling the game, and creating the best chances. Each time though, their inaccuracy in the final third let them down, and when it didn’t Priyant was there to clean up.

With five minutes left, came the moment the stadium had been waiting for — via two substitutes Bino George had sent on, with the clear intention of injecting pace and guile. The first, TK Jesin, played Jijo Joseph clear with a sublime through ball in the box.

Instead of shooting on goal, Joseph cut the ball back, and in the moment it looked like a decision gone wrong. But PN Noufal, had rushed in from the left side, reaching the pass just before Priyant’s outstretched gloves to tap it in and sent the crowd into delirium.

But the drama was not done. In the final moments, West Bengal, inert for most of the second half, conjured chances of their own. In injury time came their moment to break hearts, Supriya Pandit meeting Fardin Ali Molla’s sublime free kick with a cracking volley. The shot was from close range, and seemed destined for the bottom corner, but somehow Midhun palmed it out.

Kerala would not be denied. A minute later, off a counter, Muhammed Saheef played Jesin through cleanly on goal with just the goalkeeper to beat. The forward, who had barely put a step wrong since coming on, slotted it home. Two wins from two, the hosts had powered through, atop Group A on their own now.