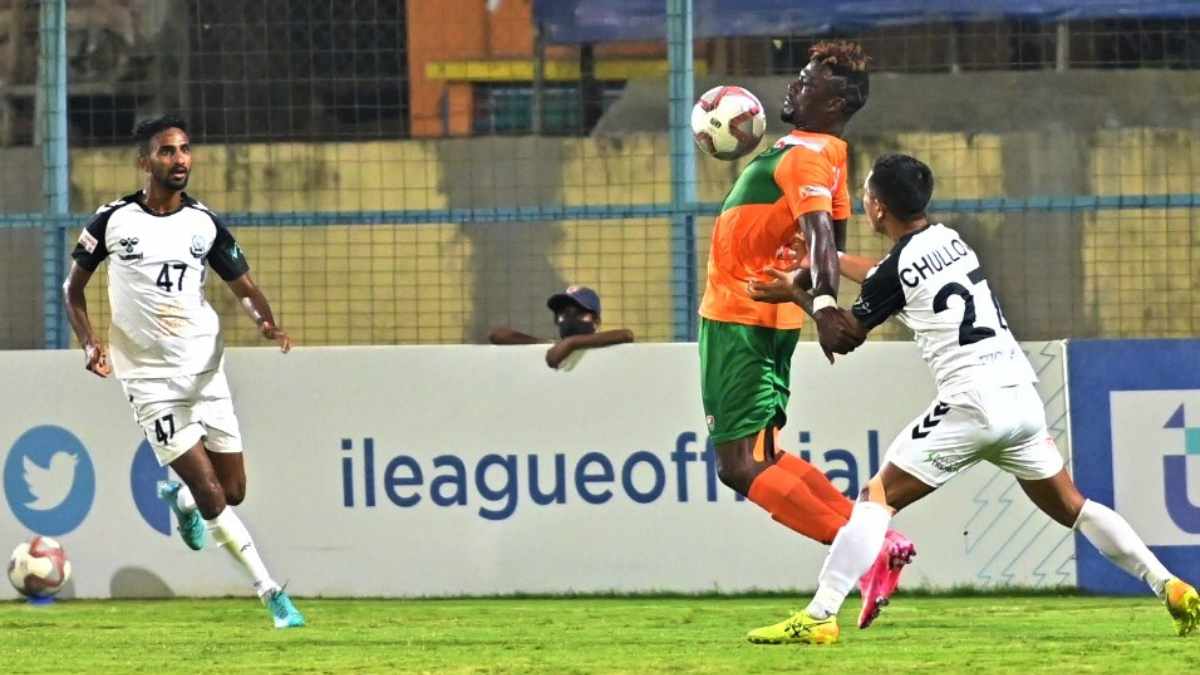 NAIHATI: Mohammedan SC came from two goals down to rescue a point from the game against Sreenidi Deccan, here at the Naihati Stadium. Two first-half goals had established a comfortable cushion for Sreenidi but Mohammedan huffed and puffed in the 74th and 90th minute to bag a point at the end.

Sreenidi Deccan started on the front foot and won themselves a corner in the very first minute. The set piece did not result in a goal but the attacking intent was stated by Sreenidi. Moments later, Mohammedan were on the attack and won a corner themselves but the delivery Nikola Stojanovic was too deep.

The deadlock was broken inside ten minutes when Arijit Bagui picked David Castaneda Munoz with a sublime long ball from the right. Castaneda, one-on-one with the keeper, calmly slotted the ball home to give Sreenidi the lead after just eight minutes.

Sk Faiaz almost helped Mohammedan draw level but his efforts were off target. Faiaz was picked out by a cross from Manoj Mohammad. Brandon Vanlalremdika and Marcus Joseph were involved in a promising move minutes later but the latter saw his effort go wide at the near post.

The situation went from bad to worse for Mohammedan when Sreenidi doubled their advantage four minutes from the half-hour mark. Mohammedan lost possession in their own half and Lalromawia pounced on it and played a low cross into Louis Ogana. The Nigerian made no mistake tapping the ball in to give Sreenidi and crucial 2-0 lead.

Aryan Lamba was at the top of his game as he made a crucial save to keep the two-goal cushion intact. Stojanovic whipped the ball in towards Faiaz, who ended up clashing with the keeper. The ball fell to Andelo Rudovic whose shot was saved brilliantly by a recovering Lamba. Ogana at the other end almost added another goal to his tally but his initial attempt was saved and the second hit the far post and rolled away for a goal-kick.

In the second half, the tempo of the game was the same. Mohammedan wanted to close the gap while Sreenidi wanted to add another goal to their tally. Marcus Joseph struck a couple of venomous strikes towards goal but both were blocked by the Sreenidi defence – Arijit Bagui with one and Hamza Kheir with the other.

Mohammedan won a couple of freekicks near the Sreenidi box. Joseph’s attempt floated just north of the bar. The other set piece was blasted wide by Stojanovic. Faiaz got in on the act too as his strike was deflected out for a corner.

Even after fluffing their lines on multiple occasions, Mohammedan did not take their foot off the pedal and were finally rewarded for it. A little over 15 minutes from time, Mohammedan finally scored their opener. Substitute Faisal Ali was set up beautifully by Stojanovic.

The Serbian drew defenders towards himself inside the box and then cleverly pulled it back towards an oncoming Ali, who slotted the ball in at the near post, reducing the deficit to one.

The momentum dropped after the second-half cooling break. Sreenidi Deccan’s defence dealt with the Mohammedan attacking pressure well. No matter what Mohammedan threw at them, it was parried to safety or did not pose a threat because of poor finishing.

However, the defensive wall of Sreenidi Deccan eventually broke down in the 90th minute. Stojanovic curled the ball into the box from a corner and Sujit Sadhu rose inside the box and buried the ball into the back of the net with a brilliant glancing header and from 2-0 down, Mohammedan SC were level.

Six minutes were added on but there was not enough time for Mohammedan to completely turn the fixture on its head and had to settle for a point. Sreenidi were on the verge of walking out with all three points, but they too had to settle for just a single point.

The draw created a huge dent in the title hopes of Mohammedan SC. They stay second in the table but are six points behind leaders Gokulam Kerala now. Sreenidi Deccan could have gone up into third with a win but they stay fourth, a point behind RoundGlass Punjab.