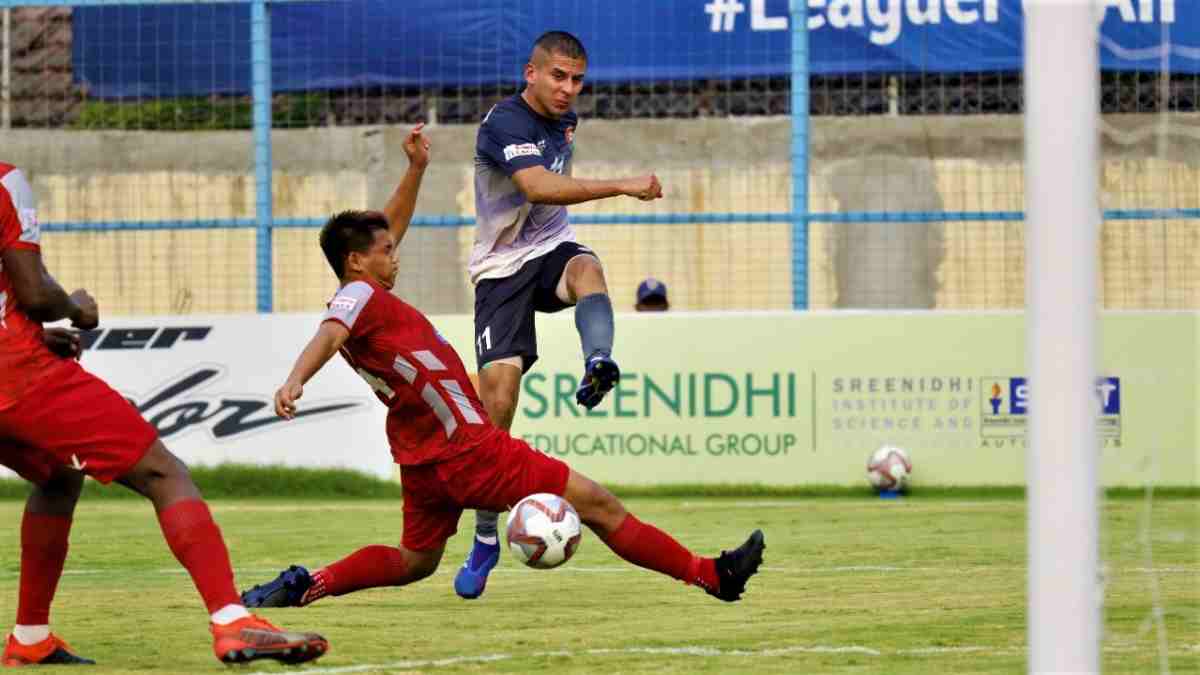 In the first minute of the game, Sreenidi Deccan lodged the first attack, moving forward with Rosenberg Gabriel down the left flank but the winger could not pick out a teammate with his low cross into the box. After that attack, Sreenidi Deccan were on the back foot for the remainder of the first half.

Five minutes into the game, Samuel Lalmuanpuia had the Sreenidi Deccan defence worried with his free-kick, but luckily for goalkeeper Aryan Lamba, the attempt flew over the crossbar. Five minutes later, Lalmuanpuia won and took another freekick from the edge of the box. This time the attempt was on target but straight at Lamba, who punched it away from goal.

On the counter, Sreenidi Deccan tried to take advantage. However, they were let down by poor passing in the final third. Eventually, they clicked as Phalguni Singh cut in from the left flank, beat his marker and then unleashed a shot at goal which was bravely saved by keeper Anuj Kumar in the 17th minute.

That attempt was the only attack that bothered Kumar and the Aizawl defence in the first half as Sreenidi Deccan had to endure a barrage of attacks till the half-time whistle. Ramhlunchhunga got on the act with a long-range effort that looked good but was eventually deflected away for another corner.

Midway through the first half, Vanlalnghenga whipped in a cross from the left as the Sreenidi Defence was scrambling to get it clear. The ball was on its way to David Lalhlansanga but the defender intercepted it and dealt with it quickly. Ramhlunchhunga’s menacing run from the left allowed Lalhlansanga to dart into the box but the striker’s attempt was palmed away Lamba.

Sreenidi Deccan did tread forward towards the end of the half. Rosenberg Gabriel sprinted down the right flank and attempted to whip it across the face of the goal. His attempt, however, was thwarted by Vanlalnghenga. It was a controversial moment as it seemed that the ball had come off the defender’s arm and then gone out of play. Ultimately, only a corner kick was awarded to Sreenidi Deccan.

Attack-minded changes were made by Aizawl at half-time. Lalliansanga replaced Lalhlansanga and Rinreithan Shaiza came on for Lalhmangaihkima. Arijit Bagui was taken off by Sreenidi Deccan as Chungnunga Lal took his place.

Sreenidi Deccan got off to a good start in the second half, launching attacks with Rosenberg down the left. The consecutive attacks were all blocked and parried by the Aizawl defence. Phalguni Singh’s brilliant strike ended up in the back of the net but the goal was disallowed as the offside flag went up against Ogana Louis who was obstructing the keeper.

However, the deadlock was finally broken seven minutes from time when Castaneda was taken down inside the box by Lalthakima. The Colombian stepped up and calmly slotted in his ninth goal of the season from the spot.

Heading into stoppage time, Sreenidi Deccan established a two-goal cushion courtesy of substitute Vanlalbiaa Chhangte. It was set up by Castaneda, who kept the ball in play brilliantly on the left flank and hit a low cross into substitute Vineeth Velmurugan. He adjusted his feet and passed it to Chhangte, who also had to adjust his stance before smashing the ball into the net.

Castaneda had a glorious opportunity to double his tally for the day but his attempted dink over the keeper was wide. This victory pushed Sreenidi Deccan up the table into third place while Aizawl’s Championship Playoff aspirations were brought to an end as they drop to ninth on the table.