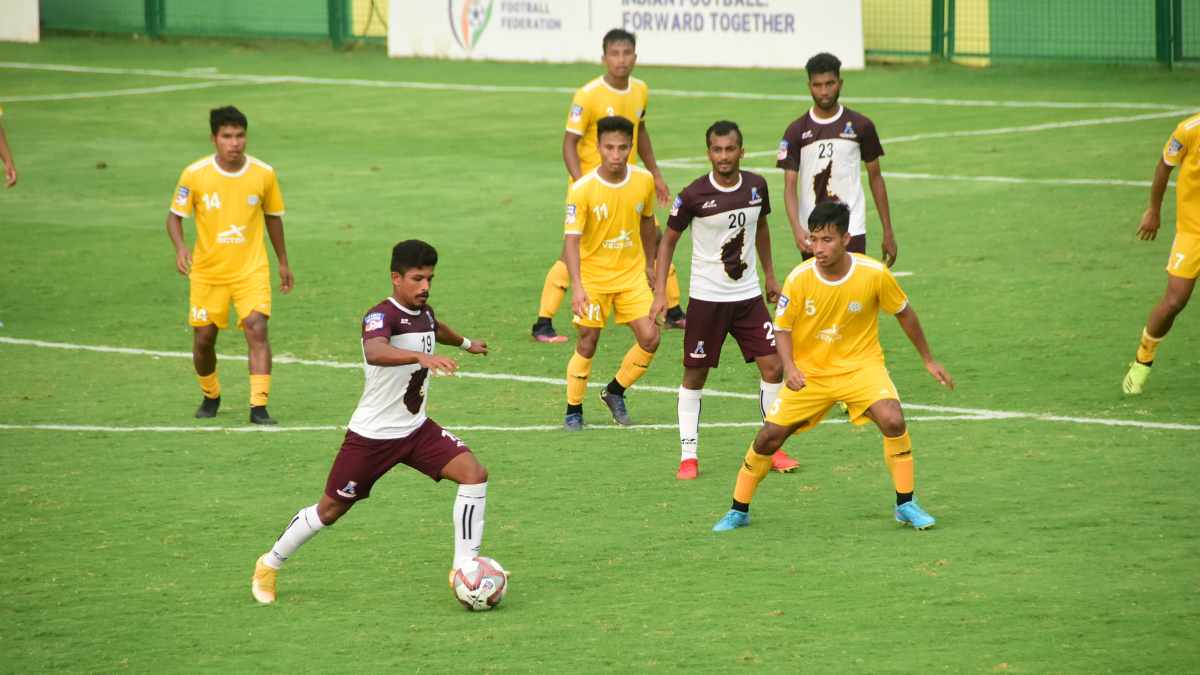 MALAPPURAM: Manipur eased past Karnataka 3-0 in a Group B match of the Hero 75th National Football Championship for Santosh Trophy at the Kottapadi Stadium in Malappuram here on Saturday. By this win, they became the first team from Group B to make the semifinals as they joined hosts Kerala.

Manipur coach Gift Raikhan had said that his instruction to his players was to go all out right from the start and ensure qualification to the last four and his team delivered. Three goals in the first-half itself with Lunminlen Haokip running the show.

The first goal of the game came from a terrible mistake by young Darshan L at left-back. He tried to pass back to his keeper Jayanthkumar Krishnamurthy but his loose pass was intercepted by an alert Somishon Shirak. He looked up and picked out an onrushing Lunminlen Haokip who made no mistake as Manipur took the lead in the 19th minute.

Lunminlen Haokip could have scored another in the space of a few minutes. Darshan L was the culprit again as he lost out to Somishon Shirak who once again found his teammate inside the box. But this time Haokip’s shot went straight to the keeper who fumbled the first time but eventually held on.

These defensive errors sparked Karnatakja into life and they had two quick-fire chances to equalise. Poor goalkeeping from Manipur’s Angomjambam Chingkhei Meitei meant a half-chance fell to Bavu Nishad TP but his shot was cleared by Thiyam Chingkheinganba.

Karnataka looked to play on the counter and their best chance fell to Solaimalai N but his powerful shot was saved somehow by the Manipur goalie. As Karnataka pushed more and more forward in search of the equaliser, they left too many gaps in midfield and Manipur soon took advantage.

A chipped through ball from Ngulgoulal Singsit found Haokip who broke the off-side trap. He still had a lot to do from there but with some sublime skills, he completely fooled Siju S and then toe-poked it past the onrushing keeper to extend Manipur’s lead in the 42nd minute.

Karnataka players seemed deflated after conceding the second and they let their heads drop. And Manipur punished them even further. A through ball found Somishon Shirak in acres of space. His first shot was saved superbly by Jayanthkumar Krishnamurthy but Shirak poked home the rebound to make it three goals without reply right at the stroke of half-time.

Karnataka had a chance to reduce the arrears after a mistimed header from manipur defender Laishram Chingkheinganba completely fooled his own keeper as it looped over his outstretched hands. Luckily for Manipur, the ball hit the crossbar and the rebound was collected by a grateful Angomjambam Chingkhei Meitei.

In the second half, Manipur were content to hold their shape and try to hit Karnataka on the break. The Karnataka players did put up a much improved display in the second forty-five minutes but they had nothing to show for their efforts. Kamalesh P and Solaimalai N both had shots from range but the Manipur keeper saved on both occasions.

Karnataka tried to utilise crosses from the flanks in a bid to come back into the game. One such cross Prashanth Kalinga found Solaimalai N in space inside the box but the midfielder failed to get his header on target.

The win meant Manipur now have nine points after four games and have secured progress to the last four. Karnataka, having played three, have four points to show for their efforts. They are still in with a shout but need to win their final game against Gujarat on Monday and hope for other results to go their way if they are to have a chance of making the semis.