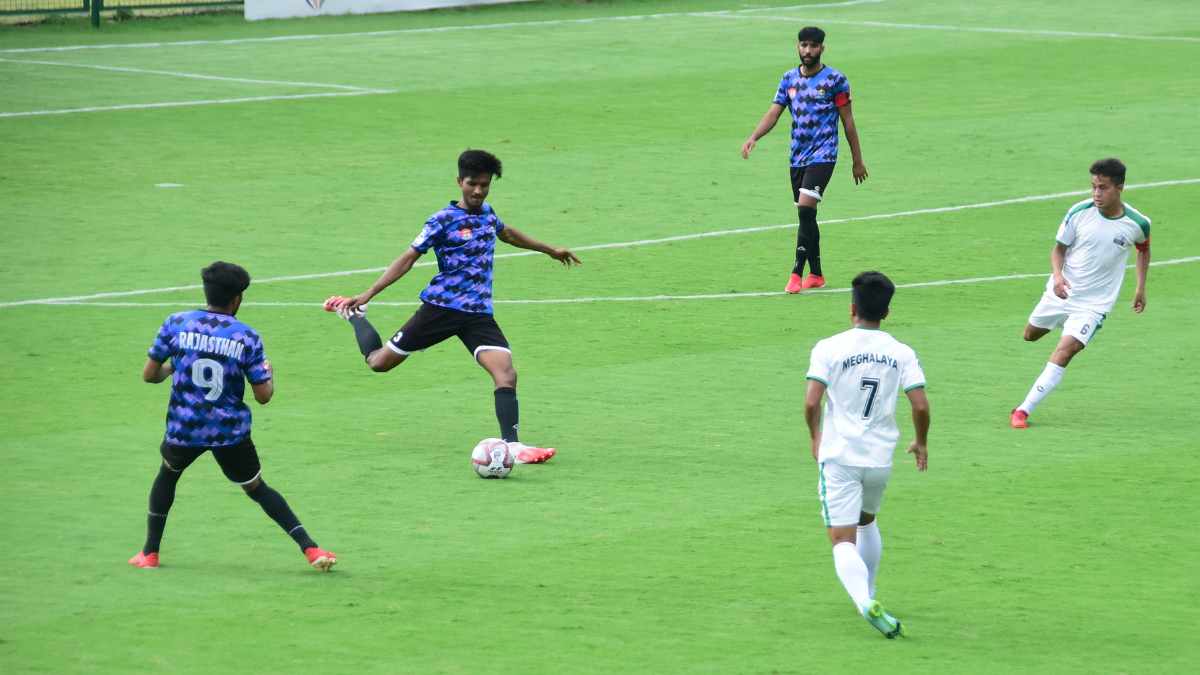 MALAPPURAM: The Hero 75th NFC for Santosh Trophy encounter between Rajasthan and Meghalaya threw up a humdinger of a contest at Kottapadi Stadium in Malappuram on Monday. As the lead exchanged hands multiple times over the 90 minutes, Meghalaya eventually ran out 3 – 2 winners against Rajasthan.

Figo Syndai scored a double, while captain Hardy Cliff Nongbri scored the decider from the penalty spot. Youraj Singh and Imran Khan registered on the score sheet for Rajasthan.

In the 2nd minute itself Youraj Singh gave Rajasthan an early lead. Youraj was stationed at the near post to provide a headed flick-on to a long throw-in from the near touchline.

The early lead gave the Rajasthan side a boost of confidence which they carried into the remainder of the first half. However, despite the early setback, Meghalaya continued to plug away at their opponents in search of a way back into the contest.

As Meghalaya pumped numbers forward in attack, it opened up space for Rajasthan to exploit on the counter-attack.

Parity was restored in the 25th minute as Figo Syndai drew Meghalaya level with a left-footed shot from an acute angle from outside the box. Rajasthan goalkeeper Gajraj Singh would have been disappointed to be beaten at his near post from long range.

Ten minutes later, Rajasthan received the opportunity to get their lead back as Goutam Bissa played Youraj Singh through on goal, but Youraj failed to control the ball inside the box at the crucial moment. Meghalaya goalkeeper Frolicson Dkhar came out quickly to steal the ball from Youraj’s feet to deny him and made a comfortable save.

The game was turned on its head in the 39th minute as Figo Syndai secured his brace and Meghalaya scored their second goal of the game. Syndai was played through on goal with a delicately weighted through ball behind the Rajasthan backline, and he made no mistake in front of goal as Meghalaya carried the lead into half-time.

As Rajasthan United stepped up their efforts in search of an equaliser on the other side of the break, Imran Khan forced the issue in the 56th minute. After a wickedly swerving long range effort was parried away by Dkhar, Imran Khan pounced to bury home the rebound and level the contest once again.

There was enthralling action once again in the 63rd minute as the referee awarded a penalty kick to Meghalaya after substitute Stephanson Pale was brought down inside the box by a tackle from defender Ankit Sharma. Meghalaya skipper Hardy Cliff Nongbri stepped up to take the spot-kick and calmly slotted the ball into the bottom corner after sending Gajraj Singh the wrong way.

As the contest swayed back and forth in favour of either side in the remaining half an hour spell, Meghalaya held on to see out the contest and secure their first win of the Hero 75th National Football Championship for Santosh Trophy, while Rajasthan slumped to their second straight defeat.