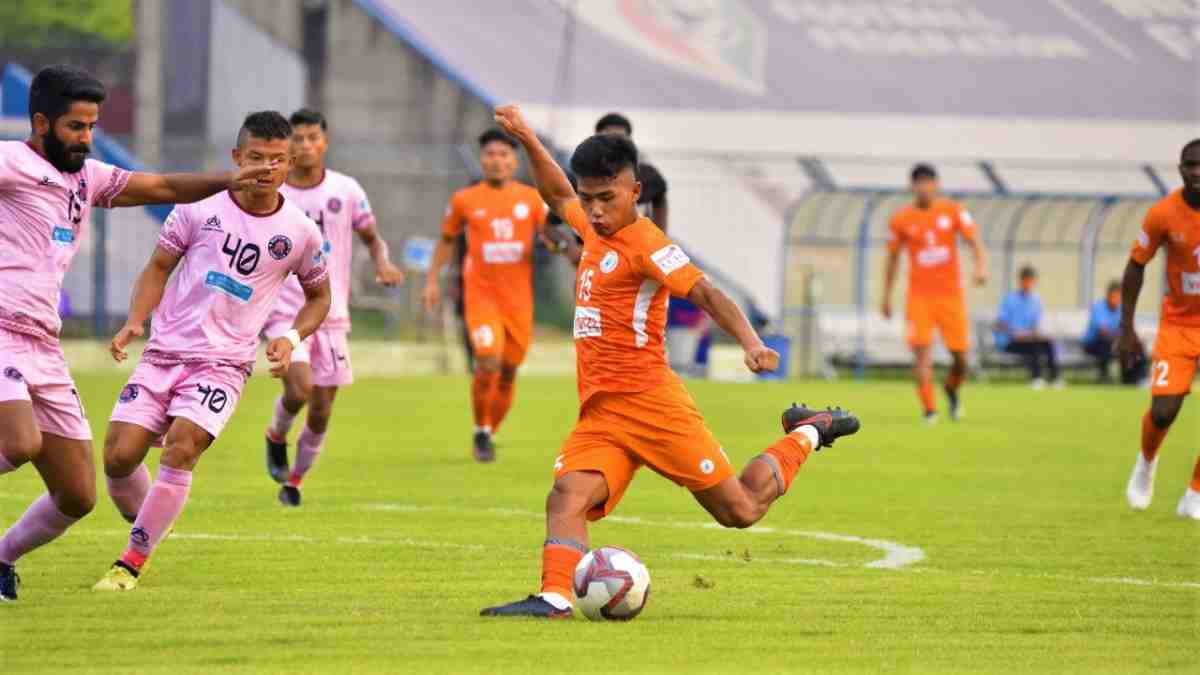 Kalyani: NEROCA FC and Rajasthan United settled for a point each as they met in the penultimate round of fixtures in Phase 1 of the Hero I-League in Kalyani on Thursday. Khaiminthang gave NEROCA the early lead in the first half, but his effort was cancelled out by a finish from close range by Rajasthan United striker Sardor Jakhonov in the second half.

In this battle between the teams occupying the 6th and the 7th spot in the Hero I-League table as things stood at kickoff, NEROCA made all the offensive running in the first period. The team from Imphal created goal scoring chances right from the offing as they made a fast start to proceedings.

In the 2nd minute, a wayward clearance from the Rajasthan United backline landed at the feet of NEROCA winger Khaiminthang. He showed quick thinking and impressive control to bring the ball under his spell, create half a yard and get a low and hard shot away across goalkeeper Bhaskar Roy, who got a hand to the shot but failed to parry the strike away.

NEROCA FC continually threatened to extend their advantage on a number of occasions throughout the first half, but eventually fell short of converting their chances at the crucial juncture.

Sergio Mendigutxia came the closest for the Orange Brigade as he struck the woodwork from a close range free kick in the 21st minute. Soon after, a slick passing move led to NEROCA finding an opening inside the opposition’s penalty area. As the ball was fed to Mendigutxia, the striker set his sights on goal from over 12 yards, but his shot was aimed right at Bhaskar Roy, making it easy for the goalkeeper to make the crucial save.

The slew of chances continued into the second half for NEROCA. In the 53rd minute, Jiteshwor Singh flighted in a bending cross from a corner kick which was met by Mendigutxia on the edge of the 6-yard box. The Spanish striker, who has 9 goals to his name this season, was the favourite to convert the chance. but he missed the target from point blank range and the chance went begging yet again for NEROCA.

Five minutes later, Davis Kamanga came onto a second ball to take on a shot from range, as NEROCA continued to apply the pressure. Kamanga’s effort, although taken well, lacked the necessary power to trouble Bhaskar Roy in the Rajasthan United goal as he beat the ball away in acrobatic fashion.

Shortly after the hour mark, Rajasthan United levelled the contest in the 65th minute against the run of play. Substitute Flan Gomes came up with some good work down the left flank as he showed the willingness to take on his opposing defender. Flan went for goal after creating a narrow opening, but his effort took a deflection on its way to goal. In the true element of a fox-in-the-box, Sardor Jakhonov came alive to sense his opportunity as he provided the slightest of touches to flick the ball past Shubham Dhas. This was the Uzbek’s third goal of the Hero I-League season.

Rajasthan United came close to completing the full turnaround in the 79th minute. Midfielder Ricky Shabong spotted Shubham Dhas slightly off his line as he attempted a lob from long range that appeared to be creeping in just under the bar. Dhas scrambled back onto his goalline just in time to provide the essential touch that took the ball away from danger.

Davis Kamanga was sent off late on as at the end of the contest, both teams finished where they began in the table as they settled for a 1 – 1 draw. While Rajasthan United controlled ball possession and the tempo of the game, NEROCA were on the end of the better goal scoring chances. Both teams will keenly look towards rivals Real Kashmir’s results now, who remain their closest challengers for a top 7 finish.