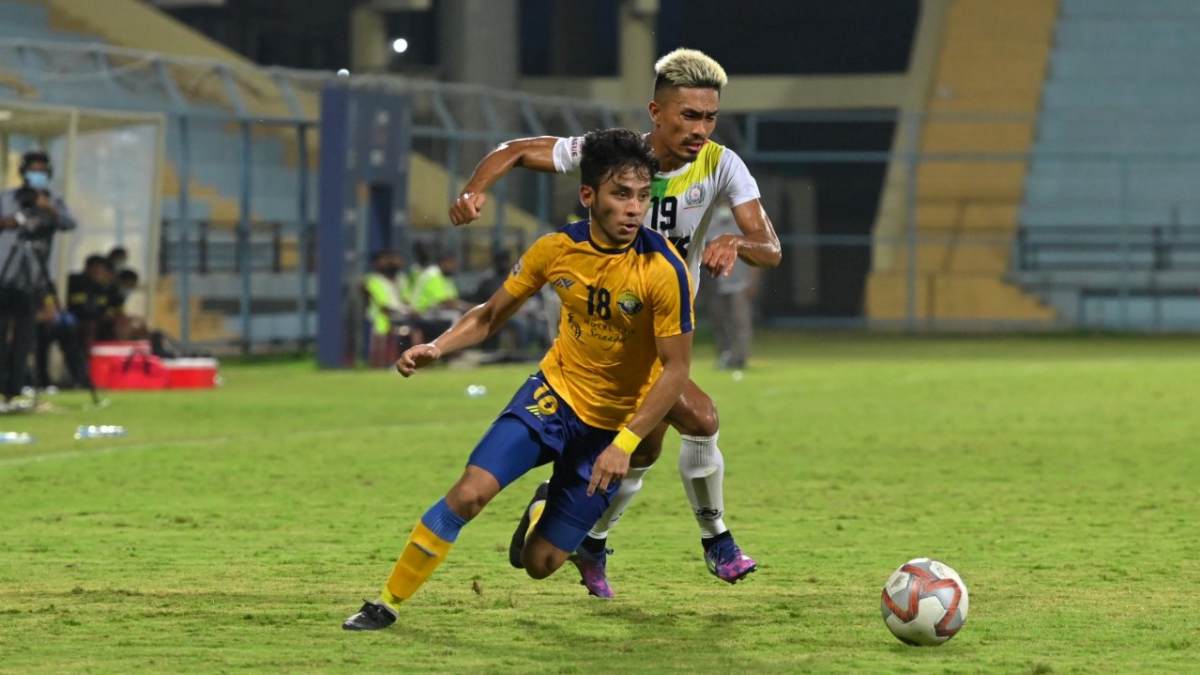 NAIHATI: Late drama at the Naihati Stadium saw Real Kashmir and TRAU end the Hero I-League Phase 1 with a 1-1 draw. The game had 0-0 written all over it till the 87th minute when Fernandinho opened the account for TRAU with what seemed like a winning goal. Real Kashmir did not stay down as they nabbed a goal in the seventh minute of stoppage time via their captain Mason Robertson.

Real Kashmir almost got their noses in front inside five minutes. Ragav Gupta lobbed the ball into the box for Kouassi Bernard, whose header beat keeper Amrit Gope but the ball was cleared off the line by TRAU skipper Helder Lobato. The defender was on his toes again just after a couple of minutes to halt another goalscoring opportunity for which he was booked.

TRAU had an opportunity after good build-up play down the left. Krishnananda Singh slid the ball through to Kishan Singh who was on an overlapping run. The low cross came in and eventually fell to Fernandinho who was unable to keep his strike on target. The next attack down the left saw Fayazuddin whipping a good looking cross towards Salam Johnson Singh, but the striker could not convert it.

A crucial and well-timed tackle by Ponif Vaz, midway through the first half, disallowed Khanngam Horam to get a shot away after being put clean through on goal by Fernandinho. After a series of TRAU attacks, Real Kashmir charged forward. Ragav Gupta played a beautiful ball towards Kouassi Bernard. The ball came off Gérard Williams’ head and fell to Bernard as the striker went past the keeper but still could not score as he struck the post.

Towards the end of the first half, TRAU were tormenting the Real Kashmir defence. However, all threats were kept at bay by Real Kashmir keeper Niraj Kumar. Right after the cooling break, Kumar denied Johnson Singh and Khanngam Horam in quick succession from close range. Minutes before the half-time whistle, Horam was denied by another brilliant save from Kumar, who dived to his right to palm the ball out for a corner.

The second half started exactly the way the first one ended. Fernandinho danced past his marker and attempted to curl his effort into the far post. However, Kumar was quick enough to dive right, get a hand on it and palm it out for a corner. The skippers came together in TRAU’s penalty area when Mason Robertson was halted by Helder Ribeiro. The defences of both sides were on top.

The arrival of Rohmingthanga Bawlte increased the attacking prowess of Real Kashmir’s gameplay. His fresh legs caused concern for TRAU defenders but ultimately the runs did not manifest into a goal. Around the hour mark, Niraj Kumar was at it again. Yet again, it was a strike from Khanngam Horam and it was on target but Kumar was vigilant and closed the angle quickly, before parrying the ball to safety.

As time ticked on, frustration grew inside both sides. Ill-timed challenges awarded free kicks to both sides. At one stage, Abhash Thapa pushed Naresh Singh into the corner flag but the referee did not blow his whistle for a foul. Both sets of defenders did what they had to do and were saved by poor finishing even if they fumbled.

Two minutes from time, the deadlock was broken as Niraj Kumar was finally beaten by Fernandinho. Substitute Premkumar Meitei, who had come on for Salam Johnson Singh in the 85th minute, crossed it in for Fernandinho, who acrobatic volley bounced over Kumar into the net.

As TRAU celebrated, they did not realise how short-lived their joy would be. In the seventh minute of added time, Mason Robertson smashed in a captain’s goal for Real Kashmir that was assisted by defender Ponif Vaz, restoring parity in the final minute of the game.