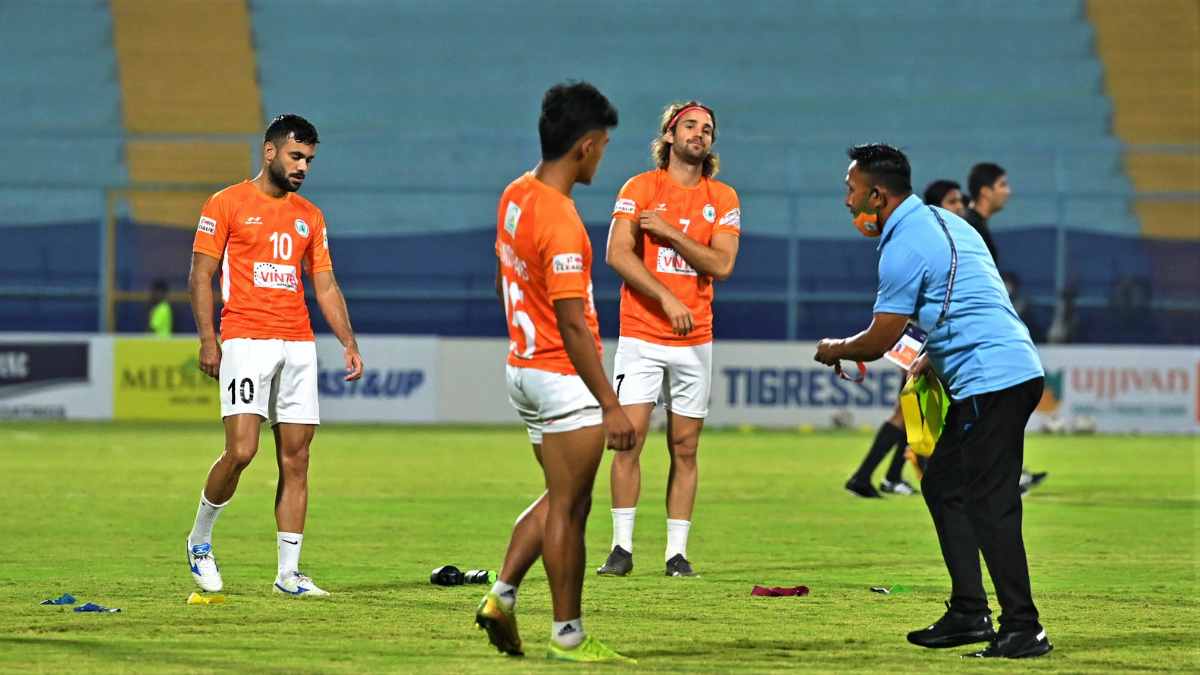 KALYANI: RoundGlass Punjab and NEROCA FC played a thrilling 3 – 3 draw to end their respective Hero I-League seasons here in Kalyani on Friday. RoundGlass Punjab looked set to finish their season on a high after leading for most of the contest thanks to goals from Freddy Lallawmawma, Travis Major and Robin Singh, but the Orange Brigade had other plans as Juan Mera inspired a solid performance to get on the scoresheet himself and provide assists for Vicky Meitei and Ben Nash to steal a hard-fought point.

In an eventful first half, NEROCA FC made the early running in the contest with territorial domination in the opponent’s half. However, RoundGlass Punjab got the first breakthrough when Freddy Lallawmawma opened the scoring in the 14th minute. Robin Singh flighted in an innocuous looking ball into the box from the left flank, which was not dealt with properly by Neroca centre back Ben Nash.

As a result, Kurtis Guthrie put his body about inside the box to win the physical duel and lay the ball off for Freddy. Freddy composed himself in a quick second and fired the ball into the near corner past Shubham Dhas to give RoundGlass Punjab the lead.

RoundGlass Punjab came close to doubling their lead on a couple of occasions through two headed chances for frontman Kurtis Guthrie. In the 19th minute, Joseba Beitia showed a moment of unique invention to scoop the ball into the path of Guthrie, whose headed effort over the onrushing Shubham Dhas hit the frame of the goal and bounced out of play.

Just a minute later, Robin Singh produced a delightful cross with the outside of his left boot to find Guthrie at point blank range from goal, but this time the Englishman was denied by a fantastic save from Shubham Dhas.

After threatening to double their lead earlier, RG Punjab finally delivered on their promise in the 28th minute. A corner kick from the left flank was flicked on at the near post by Robin Singh and met at the far post by Travis Major, who was careful to head the ball into the roof of the net past the melee of NEROCA defenders trying to thwart the attempt at the goal line.

NEROCA FC countered with a response in the 36th minute, pulling a goal back through Vicky Meitei. After working the ball down the left wing, Juan Mera used his quick footwork to create a yard of space and deliver the ball into the far post, which was met by an unmarked Vicky Meitei, who made no mistake with his first-time finish.

Juan Mera then had a golden opportunity to equalize for NEROCA FC in the 38th minute, but the Spanish playmaker fluffed his lines from inside the box after coming on to his favoured left foot and looking certain to score.

The 2 – 1 scoreline at the interval reflected an attacking half of football, but the goal scoring actions was by no means over.

On the other side of half time, Robin Singh came to the fore and restored RG Punjab’s two goal cushion in the 48th minute. Maheson Singh carried the ball in midfield and waited for just the opportune moment to thread the ball through on the inside of the covering full back, thereby playing Robin Singh through on goal. The delightfully weighted pass was just perfect for Robin Singh to sweep the ball home with a first-time finish at the far post.

Just as RG Punjab showed signs of pulling away and securing a win in the contest, NEROCA FC came right back and reduced the arrears once again in the 55th minute. It was Juan Mera this time who stepped up to take a penalty kick, and the Spaniard made no mistake from 12 yards as he cheekily dinked a Panenka penalty into the back of the net.

The Orange Brigade completed their comeback in the 86th minute, and it was a tale of redemption for Ghanaian Ben Nash, who made amends for his error earlier in the game with the final contribution of the match. Nash towered over everyone else to meet a Juan Mera free kick in the air and head the ball back across goal to seal the sixth and final goal of the encounter.

The draw confirmed a 5th place finish for RoundGlass Punjab, who end the campaign with 28 points, while NEROCA FC finished in 7th place in the league table with 20 points.