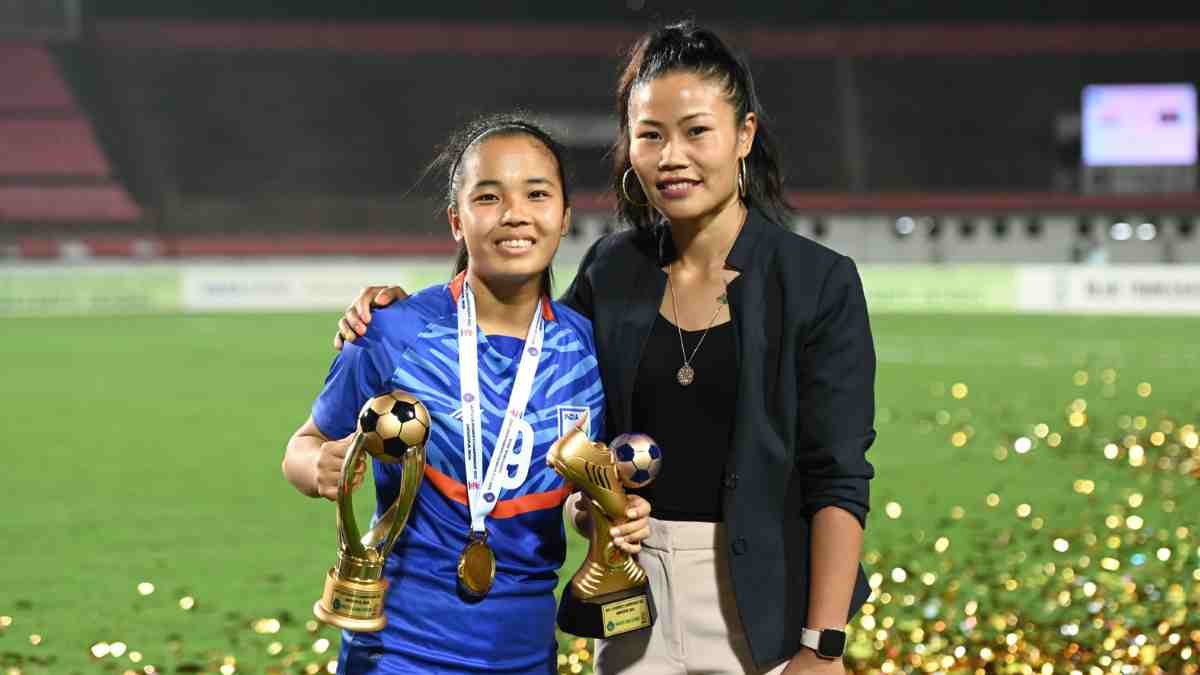 JAMSHEDPUR: The SAFF U-18 Women’s Championship was an initial step for a number of newly scouted players, who are likely to represent India in the FIFA U-17 Women’s World Cup, which is set to take place in the country in six months’ time.

One such player who has mesmerised one and all during the championship, and is looking forward to preparing for the FIFA U-17 World Cup is striker Lynda Kom Serto. Typifying the mentality of those who ply their trade in her position, Lynda is one who, by her own admission, is always hungry to score goals.

“I go into every game with the aim of scoring more than I did in the last game. It may not always be possible, but as a striker, it’s a good aim to have,” the 17-year-old striker, said to the-aiff.com.

Ending the SAFF U-18 Women’s Championship with five goals from four matches, Lynda Kom bagged the Golden Boot and the Most Valuable Player of the tournament awards.

“I am extremely happy to have won these awards, but this is all down to my teammates, without whose help, I would not be able to score these goals. It is because they had put in all the hard work in defence and in midfield, that I was able to score,” she said. “I want to dedicate these awards to my teammates and to the entire staff in the team, who have been so supportive of me.”

Hailing from the Khoirentak Khunou village in Manipur, Lynda Kom is one of many, who has had to face the struggles of societal gender norms in her earlier days. The daughter of a farmer and a stationary shopkeeper, Lynda’s family was not always aware of the prospects for Lynda in the beautiful game.

While she would often run off to play alongside the boys at her village ground, Lynda would often be told to focus on building a career through academics.

“My father would always scold me whenever I used to come back from the ground. He would tell me to concentrate on studies instead of playing football. But I always wanted to play,” Lynda averred with a sheepish smile.

Soon, the youngster got through to the SAI Academy after a trial which gave direction to her footballing dreams. She soon made long strides in junior football, representing India in the 2017 SAFF U-15 Championship, and was subsequently scouted for the U-17 World Cup team in 2019.

“Once I started playing for the junior National Team, I think my parents began to see the scope of football. That’s when they started supporting me in my endeavours,” she said.

Many would have often noticed Head CoachThomas Dennerby refer to the young striker as Biju, and not Lynda at interviews and press conferences. The forward from Manipur went on to explain the reason behind it.

“We had three different Lindas in the camp at that time, and it was always difficult for everyone. Whenever anybody would call Linda, three of us would look back at them. So all my teammates, mostly the Manipuri ones, named me Biju, after the Manipuri actress Biju Ningombam.”

“I did not really mind, because she is my favourite actress, and many of my teammates also believe that I resemble her,” she laughed.

In the footballing world, Lynda is one who idolises Cristiano Ronaldo and the hard work that he puts in to be the best on the pitch. Typifying the same approach to the game, Lynda believes in constant improvement.