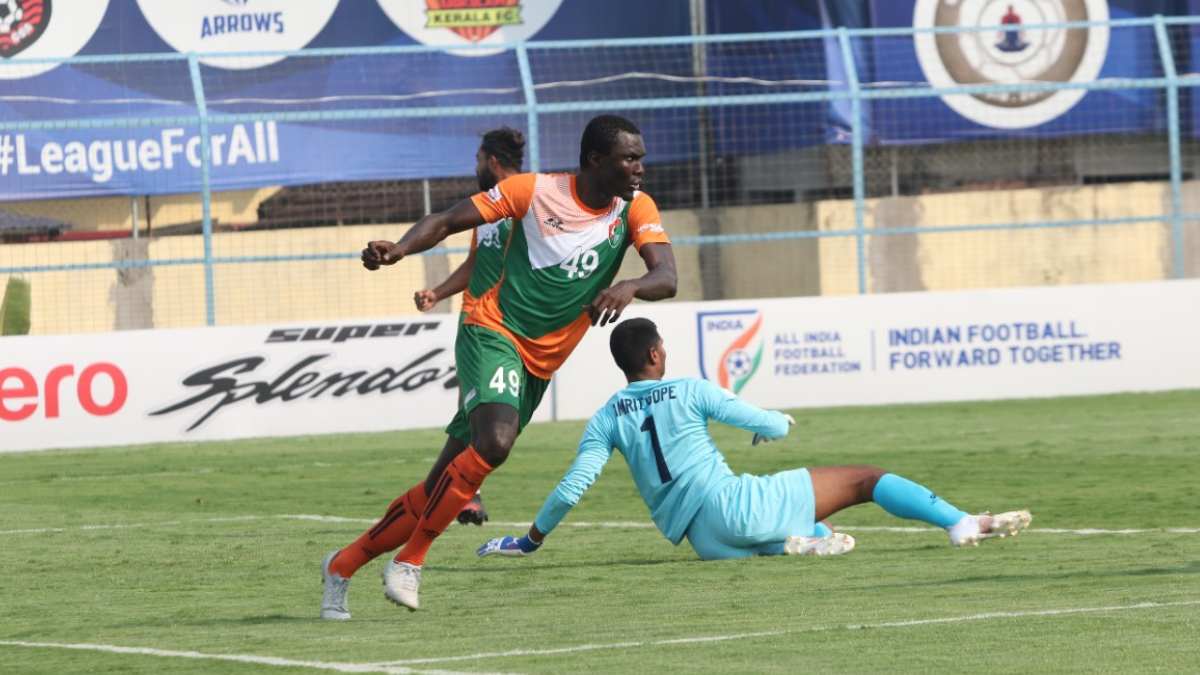 David Munoz starred for Sreenidi Deccan FC as the Andhra Pradesh-based franchise picked up a 3-1 win over TRAU in Hero I-League 2021/22 season on Thursday (March 3rd) at the Naihati Stadium. While Munoz scored a brace (2′, 41′), Louis Ugochukwu Ogana (30′) scored one goal, as Sreenidi Deccan registered their first win in the Hero I-League. TRAU did well to fight on till the final whistle, with Akobir Turaev (33′) getting a goal, but were unable to change the result.

Sreenidi Deccan kicked off the proceedings in style with Munoz getting the first goal in just the second minute of the match. Munoz received another opportunity in the 7th minute to get a shot on target. But TRAU FC’s goalkeeper Amrit Gope was quick to deflect the ball to his right.

Salam Johnson Singh and Joseph Olaleye started linking up well on the front lines as TRAU started dominating possession and sitting deep in Sreenidi Deccan’s half. In the 25th minute, a diagonal cross from Netrajit Singh inside the box towards Salam Johnson Singh provided a big opportunity for TRAU to get the equaliser. But Sreenidi Deccan goalkeeper Shibinraj Kunniyil kept his calm and caught the ball to avert the danger.

In the 29th minute, Sreenidi Deccan extended their lead to 2-0 with Louis Ogana receiving the ball from the right and sending it towards bottom-right corner past TRAU goalkeeper Amrit Gope. But Akobir Turaev managed to get one goal back minutes later, as he struck a right-footed shot inside the nets, bringing TRAU back in the contest. In the 40th minute, a free-kick inside the box from Lal Chungnunga was headed in by David Munoz to again exceed Sreenidi Deccan’s lead by two goals, and they went into halftime leading 3-1.

The second half kicked off with TRAU FC putting pressure to get back on level terms. But the Hero I-League newcomers quickly got back in control and David Munoz started threatening TRAU’s defensive forces once again. In the 51st minute, Munoz’s shot was saved by TRAU goalkeeper Amrit Gope. With the club from Visakhapatnam maintaining possession, the contest became locked up in the midfield areas as TRAU started keeping a tight defence.

In the 65th minute, TRAU were awarded a free-kick opportunity to get a goal back but Fernando Jose’s shot went off-target. Both the teams made substitutions to get fresh legs on the pitch. In the 78th minute, Netrajit received a ball inside the box and got a looped header on the ball, but it went just wide off the goalpost. Two minutes later, Netrajit received a through ball inside the box from Fernando, but his right-footed shot just went wide and TRAU missed another glorious opportunity.

TRAU continued to search for another goal, showcasing tremendous fighting spirit till the final whistle. But Sreenidi Deccan kept hold of possession in the final few minutes to run the clock down, and clinched the three points.

Sreenidi Deccan will next playoff against Mohammedan Sporting on March 7, 2022, while TRAU will next face off against Neroca FC on the same day, in what promises to be yet another exciting Imphal Derby.