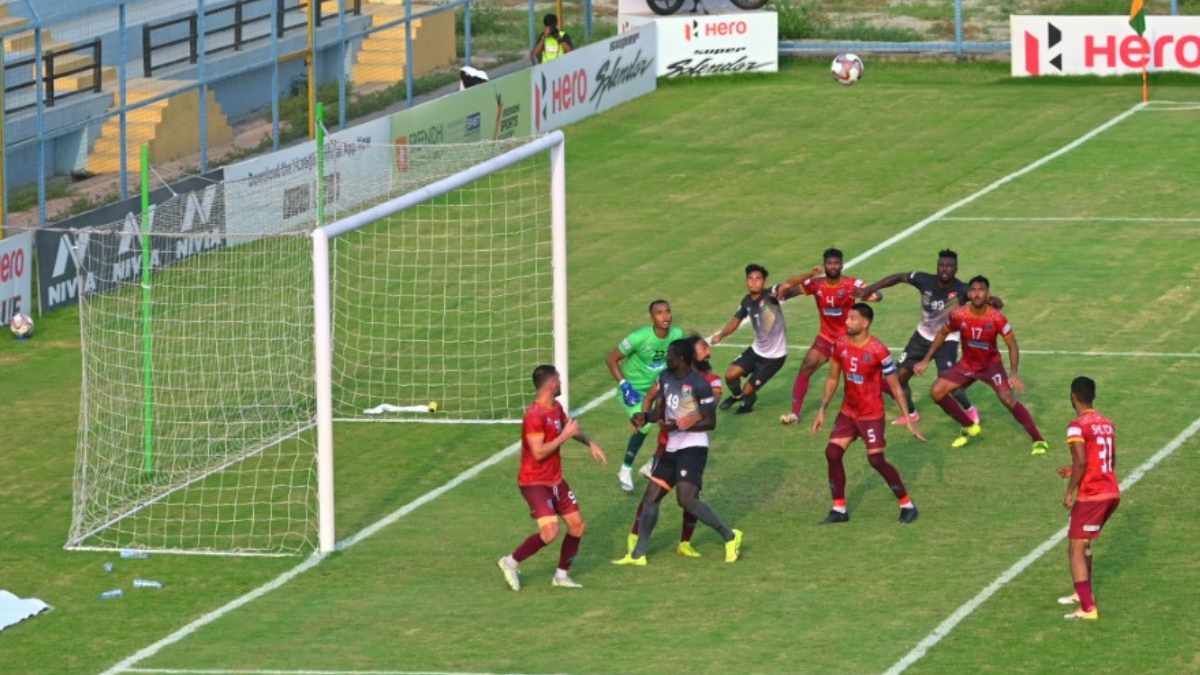 KOLKATA: Rajasthan United secured their spot in the Championship Playoff after a 0-0 draw against Sreenidi Deccan, here at the Naihati Stadium. Rajasthan dominated the game and it seemed they would come out on top but eventually they had to settle for a third consecutive draw.

Just forty seconds into the game, Rajasthan United stated their intent as Pritam Singh was picked perfectly in the box by Pedro Manzi. Singh’s effort was blocked and it flew out for an early corner. Minutes later, Manzi had the opportunity to put his side ahead in the game after a quick 1-2 with Sardor Jakhonov. Unfortunately for the striker, the final pass was a tad too heavy.

Sreenidi Deccan striker David Munoz was having a lonely game up top as the opening ten minutes were dominated by Rajasthan United. However, the Columbian pounced on a poor pass from Shilton D’Silva and registered his side’s first proper attack. His shot, eventually, flew off-target. Moments later, the ball was back in the other half and Hamza Kheir blocked Jakhonov’s attempt at goal.

Approaching the twenty-minute mark, the front-three of Rajasthan United linked up well again. Pritam Singh whipped a low ball into the box which was beautifully cushioned by Manzi and on a plate for Jakhonov. However, the Uzbek spurned a glorious opportunity as he could not keep his shot on target from close range.

Rajasthan United midfielder Omar Ramos was controlling the midfield but even he was caught napping midway through the first half. The ball ended up at the feet of Phalguni Singh who darted into the box but his final touch let him down just when he was about to get his shot in. David Munoz played a quick give and go with Girik Khosla but Munoz’s attempt sailed over the bar.

Minutes into the second half, Phalguni Singh trotted forward once again but was unable to find the final pass. The first Rajasthan United attack of the second half came when Ricky Shabong’s tame effort from distance rolled into the arms of Aryan Lamba. A little bit of frustration crept in when defender Mauro Dos Santos was booked for what seemed to be his first challenge of the game.

Both teams had plenty of opportunities to draw first blood but poor finishing let them down. Sreenidi were forced into making a substitution to take half-time substitute Rosenberg Gabriel off after an unfortunate injury to the winger. Midway through the second half, substitute Louis Ogana sprinted down the right and played it in towards Phalguni Singh. Singh’s effort sailed over the bar again.

Sreenidi Deccan’s best chance of the second half fell to Lal Chungnunga. The defender smashed the ball on-target from a free-kick close to the box but it was cleverly headed out for a corner by Pedro Manzi who was tracking back towards the goal line. That was the Spaniard’s last contribution to the game as he was taken off and replaced by youngster Gyamar Nikum.