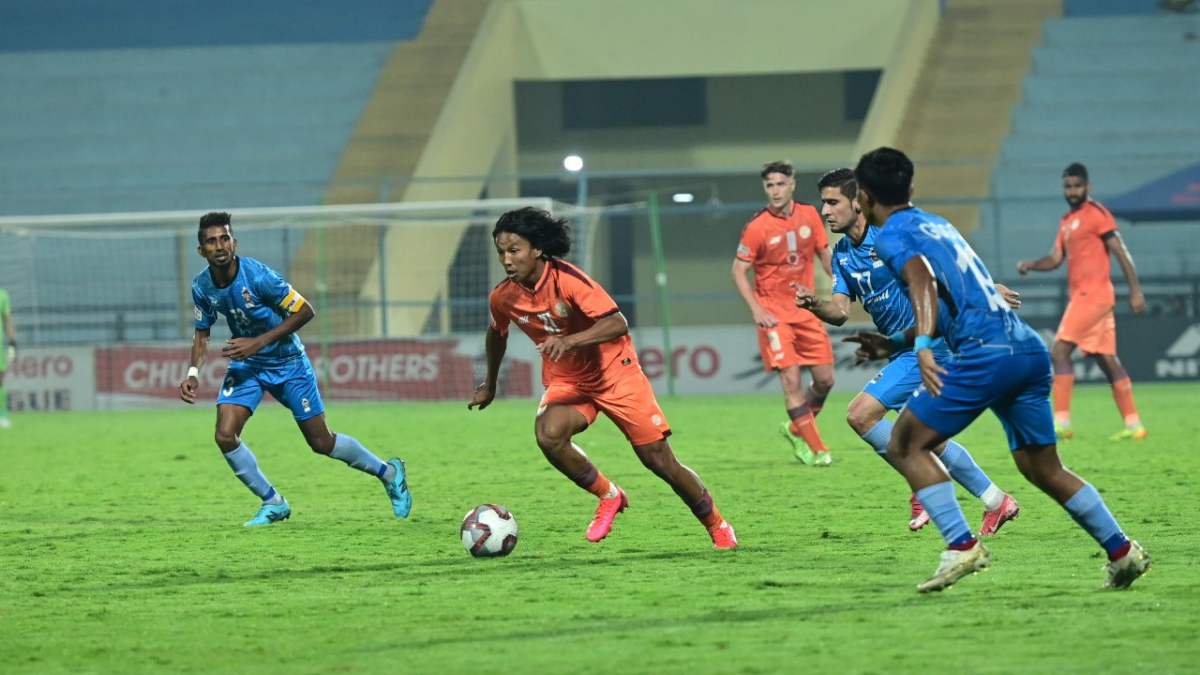 Churchill Brothers and RoundGlass Punjab went toe-to-toe in an epic clash to share the points in the twelfth game of the 2021-2022 Hero I League.

Churchill Brothers, who are considered as one of the title contenders had a rough start to the Hero I League 2021-22. The Goa-based side lost 1-0 to the former Hero I League Champions Gokulam Kerala FC in their first game. RoundGlass Punjab FC on the other hand started their campaign with a brilliant 2-0 result against Rajasthan United Football Club.

The game kicked off with both sides looking to control the play in the midfield with aggressive play. In just the second minute of the game, Churchill Brothers won a Free Kick near the opposition box, this was just a sign for things to come.

RoundGlass Punjab dominated the early proceedings in the game, controlling the game in the middle of the park but Churchill pressed them immensely. In the 10th minute of the game, Guilherme Dost Santos of Churchill Brothers got injured and had to be replaced by Sekou Sylla.

After coming on minuted before, Sekou Sylla latched onto an inch-perfect cross from Komron Tursunov in the 17th minute to give Churchill the lead.  RoundGlass Punjab didn’t bog down and tried to get the score back to level terms with repetitive attacks. Ashish Jha and Rupert Nongrum had glorious chances in the 21st and 25th minute to score for RoundGlass but could not capitalize.

The Churchill resistance finally broke in the 34th minute of the game as Kurtis Guthrie’s right-footed shot from an acute angle inside the box found its way into the back of the net. The back and forth between the two teams continued with both teams enjoying successful passages of play during different phases.

Churchill regained their lead in the 44th minute as a beautiful first-time curler delivered by the Full Back Lamgoulen Gou Hangshing, found Kenneth Ikechukwu headed the ball into the goal. The first half ended with Churchill leading RoundGlass 2-1.

In the second half, RoundGlass yet again tried to control the midfield battle as Churchill were looking to hit them on the break. They were trying to equalize as Kean Lewis hit a shot from 30 yards out in the 52nd minute but it ended in the goalkeeper’s hands.

In the 59th minute, another counter-attacking play by Churchill almost gave them a two-goal cushion as Bryce Miranda crossed the ball in the box but it got deflected for a corner.

It looked like Churchill would run away with the three points but RoundGlass Punjab equalized late on in the 88th minute of the game. Kurtis Owen scored a wonderful free-kick from outside the box to bring the game to 2-2 for RoundGlass. The game ended with both teams getting something out of a game in which they put their all in. The end-to-end battle gave both teams a point each.

RoundGlass Punjab FC faces Kenkre FC in the next round of games while, Churchill Brothers will have a chance to secure their first win of the season against Sudeva Delhi, who are a two-game losing streak.