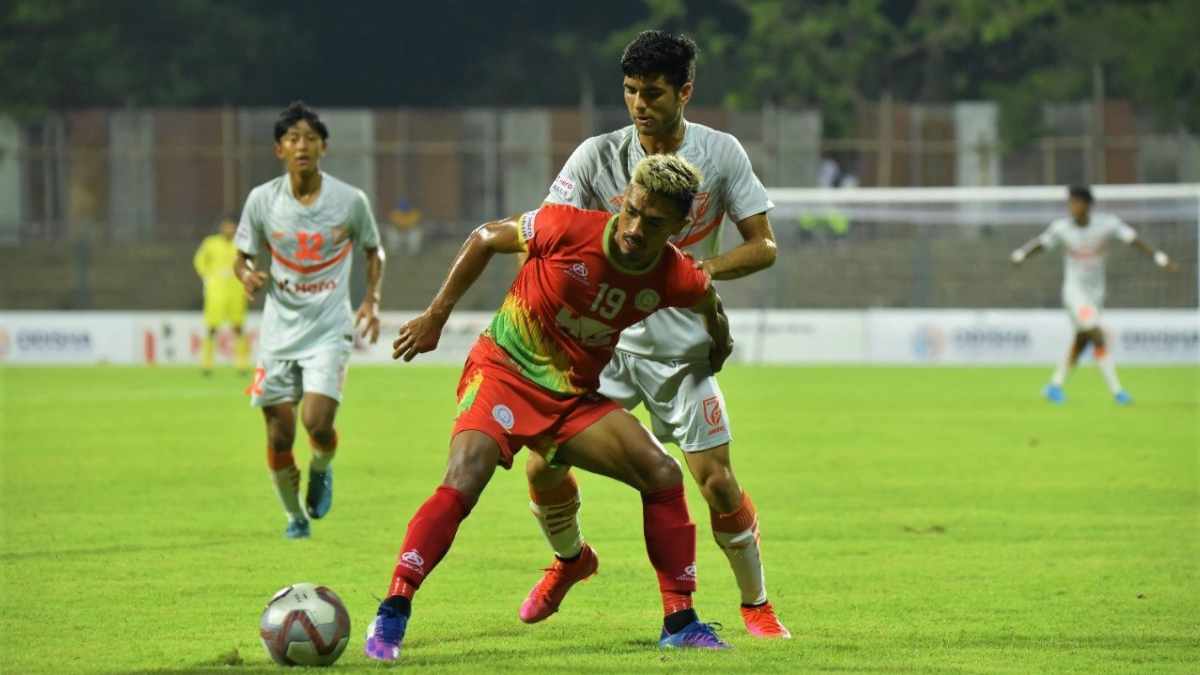 KALYANI: A cagey encounter between TRAU and Indian Arrows ended in a goalless draw, here at the Kalyani Stadium. The result means that TRAU and Arrows have now played a 0-0 draw against each other in both the phases of this season’s Hero I-League.

The game got off to a very cagey start with both sides testing the waters in the opening few minutes. Nearing the 10-minute mark, TRAU had a glorious opportunity to put their noses in front when Roger Khuman picked Salam Johnson Singh out with a superb long ball into the Arrows’ box.

Singh’s initial effort was saved brilliantly by keeper Zahid Bukhari. The rebound fell to Singh again and the striker’s second attempt came off the upright as TRAU failed to capitalise on a golden opportunity.

A minute later, Douglas Veloso came close but ended up clattering with the keeper and conceding a foul. Md Fayazuddin and Roger Khuman were able to find Veloso at the end of their passes but on both the occasions, the Brazilian put it over the crossbar. Fernandinho also tried his luck from range but it was wayward.

Arrows were kept in their own half for majority of the time but did dare to trot forward midway through the first half. Arrows’ skipper Taison Singh stood over a free-kick on the right flank, on the edge of the box and whipped in a cross that was too deep and missed the heads of all players and went out for a goal kick. To add to their woes, Arrows also lost Leewan Castanha to an injury just before half-time.

The second half started off exactly the way the first half did. Neither of the keepers were really tested till the 51st minute when Parthib Gogoi forced Bishorjit Singh to make a save. Arrows launched another attack in quick succession, this time Vibin Mohanan could not keep his effort on target.

After dealing with consecutive attacks, TRAU played the ball forward. Salam Johnson Singh tried his luck from an acute angle but his effort was deflected out for a corner. Raj Basfore was defensively astute for Arrows, consistently dealing with TRAU attacks and long balls into the box.

Minutes past the hour mark, with options on either side, Brijesh Giri went for goal himself but his effort was palmed over the bar by Bishorjit Singh. Fayazuddin delivered another cross towards Douglas Veloso, at the other end, and the Brazilian failed to keep it on target again.

Substitute Premkumar Meitei almost put TRAU in the lead when he took the ball away from keeper Zahid Bukhari and took a shot at goal. His effort was heroically denied by Arrows’ substitute Abdul Hannan who got his head in the way and ensured that the ball went out for a corner.

Eight minutes from time, Fernandinho made a mazy run into the Arrows’ box but he was thwarted by the defence and the ball went out for a corner that resulted in nothing. Defences were on top and finishing was not up to par as the game ended in a goalless draw.