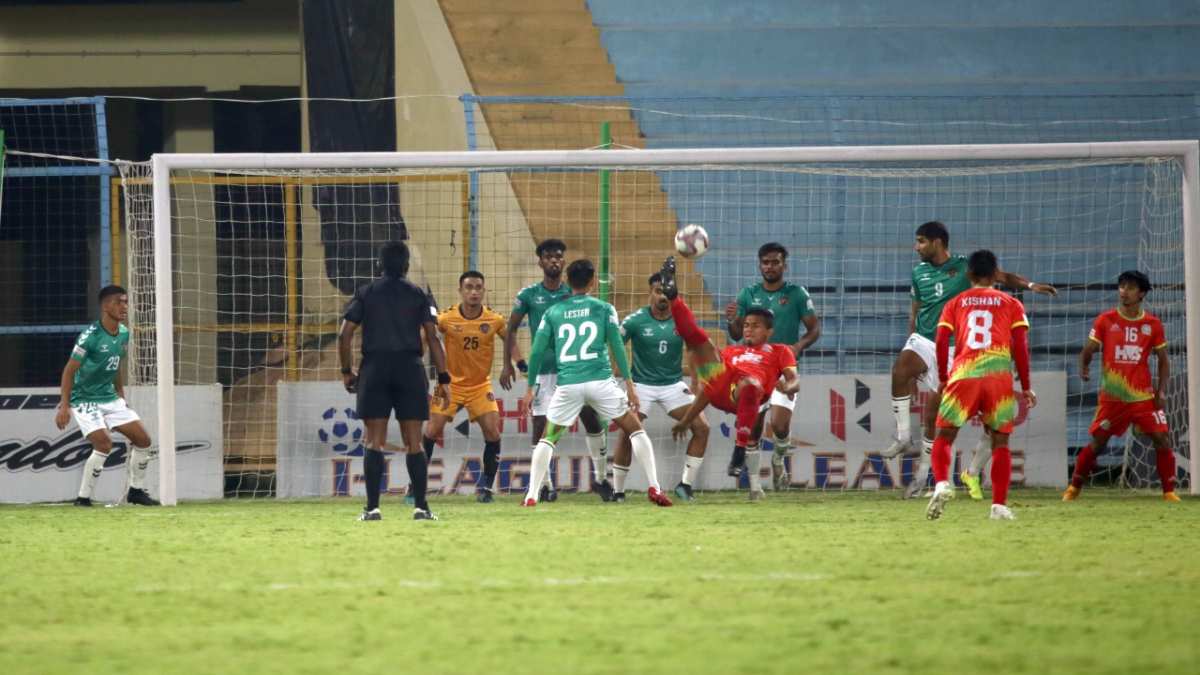 TRAU FC (Tiddim Road Athletic Union) climbed to the 6th spot on the table after clinching a win in their match against Kenkre FC in the HERO I-League 2021-22 here on Wednesday. TRAU scored three past Kenkre in the final game of the 5th round of matches to cap off a magnificent performance at the Naihati stadium.

TRAU now have seven points in five games with the help of two wins, a draw and two losses. On the other hand, Kenkre’s troublesome season continued as they’ve now lost three out of four games and find themselves at the bottom of the table.

The game kicked off with both sides vying for the ball in the middle of the park. TRAU slowly gained momentum and looked like the side to score first. The breakthrough came for them in the 14th minute of the game. Douglas Veloso headed in a looping delivery into the back of the net to make the score 1-0.

Ranjit Pandre had a chance to double his side’s lead in the 26th minute but his header was saved by the Kenkre goalkeeper, Amrit Gope. TRAU FC dominated the proceedings in the game, keeping the ball and playing out from the back as the first half whistle blew.

TRAU began the second half on the up, pressing high in search of another goal. They got their goal just three minutes into the half through Manash Gogoi. Buanthanglun Samte floated in a beautiful corner which Gogoi was able to smash into the goal through a bicycle kick to double TRAU’s lead.

The third and final goal of the evening came in the 64th minute through captain Krishnananda Singh. Samte gained another assist as he provided a sumptuous pass to Krishnananda who struck it well from his left foot to kill the game off.

Kenkre tried different things to change the outlook of the game but were unable to cause any significant trouble to TRAU’s defense in the final 20 minutes of the game. Kenkre even sent in Siddharth Colaco and P C Rohlupuia just after the third goal but weren’t able to get a consolation goal as the game finished 3-0.

TRAU’s captain Krishananda Singh was awarded the Hero of the match for his fantastic effort. TRAU now face Gokulam Kerala in their next game. While Kenkre have a daunting task ahead of them in their clash against table-toppers Mohammedan SC in the next round of fixtures.