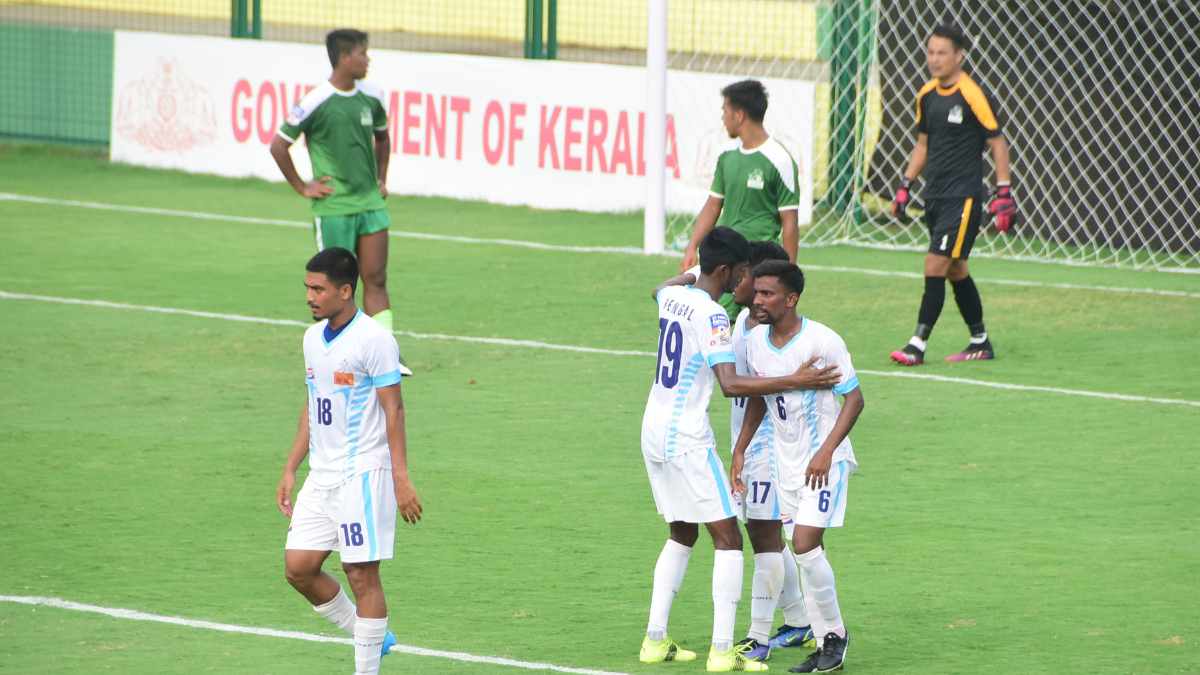 MALAPPURAM: In a thrilling encounter, West Bengal got the better of Meghalaya 4-3 in a Group A match of the Hero 75th National Football Championship for Santosh Trophy at the Kottapadi Stadium in Malappuram here on Friday. A brace from Md Fardin Ali Molla and Mahitosh Roy ensured Bengal returned to winning ways.

Prior to the game, Bengal coach Ranjan Bhattacherjee mentioned how crucial this encounter will be for the 32-time champions considering the tight nature of the group. He also spoke of how the three-day gap rejuvenated his team.

West Bengal completely dominated the first half. They hogged the majority of the ball possession, and used their flanks to great effect. Md Fardin Ali Molla and Dilip Orawn were live-wires throughout the opening period. A fair few long range attempts were tried by the Bengal players before the first goal of the game arrived in the 23rd minute.

Dilip Orawn made a brilliant solo run down the left channel before a fine cross which took out two Meghalaya defenders. From a difficult angle and with the ball bouncing, the Meghalaya defenders must have been expecting Md Fardin Ali Molla to control the ball. But instead the 20-year-old took his shot first-time and the ball rifled into the net with the goalkeeper a mere spectator.

The goal meant Meghalaya stepped up their attacking forays while the Bengal players went back into their shape and tried to catch the opposition out during the transition moments. One such counter attacking move resulted in Shubham Bhowmick isolating his marker as he used his physical prowess to hold him off before unleashing a shot which went well over.

Meghalaya had no real attempts till the 40th minute and it seemed like Bengal were in cruise control. But things quickly changed in the 40th minute when Subhankar Adhikari made a hash of an easy clearance from an innocuous through ball attempt. Sangti Janai Shianglong punished the mistake and Meghalaya restored parity completely against the run of play.

Credit to the Bengal players as they refused to let their heads drop and restored their one-goal advantage within two minutes. Dilip Orawn showed quick feet to evade his marker and crossed inside the box. Md Fardin Ali Molla was tripped and referee Senthil Nathan S had no hesitation in pointing to the spot. The attacker sent the goalkeeper the wrong way to help his side go 2-1 up right on the stroke of half-time.

The second half was even more entertaining. Meghalaya coach Bobby Lyngdoh Nongbet had told prior to the game how his team was pumped up for the occasion and how they wanted to cause a major upset. And as soon as play resumed, Meghalaya restored parity once again. Another defensive mishap meant Sangti Janai Shianglong was clean through on goal and he made no mistake as he slotted the ball home past a diving Priyant Kumar Singh.

Mahitosh Roy had been finding space just outside the box time and again but each time, he had failed to trouble the keeper. But he more than made up for his numerous misses in the 49th minute. The Meghalaya defenders made a hash of a long ball punted forward from the back and Mahitosh unleashed a fierce overhead kick with the goalkeeper rooted to his position to make it 3-2 in Bengal’s favour.

Once again, the Bengal lead did not last long and Meghalaya took advantage of another defensive howler, this time from skipper Monotosh Chakladar. Kynsaibor Lhuid found himself free on the right and his cross was turned in by substitute Shano Tariang. A hat-trick of errors led to easy goals for the team from the North-East.

Meghalaya players sensed that Bengal players were there for the taking and kept upping the ante with a snapshot from Figo Syndai forcing a save out of Priyant Kumar Singh. But as they pressed more and more forward, they gave away too much space for the counter.

And in the 69th minute, one such move paid dividends for Bengal. A long ball found Dilip Orawn in space down the right. His pin point cross was met first time by Mahitosh Roy and he swept the ball home to make it 4-3 for Bengal.

Despite Bengal’s brilliant attacking display, their defenders time and again looked nervy and a handball from a corner meant Meghalaya once again had the chance to draw level in the 86th minute. Meghalaya skipper Hardy Cliff Nongbri stepped up but Priyant made an incredible double save, including from the rebound attempt and Bengal somehow clung on to claim all three points from a thoroughly engrossing contest.

The win meant Bengal now have six points from three games and remain in the hunt to make the last four. They will next face Rajasthan on Sunday. Bengal coach Ranjan Bhattacherjee will be keen to ensure his players do not get complacent while also ensuring the defensive unit improves. For Meghalaya, despite a valiant effort, they find themselves with four points from as many games with Punjab up next.